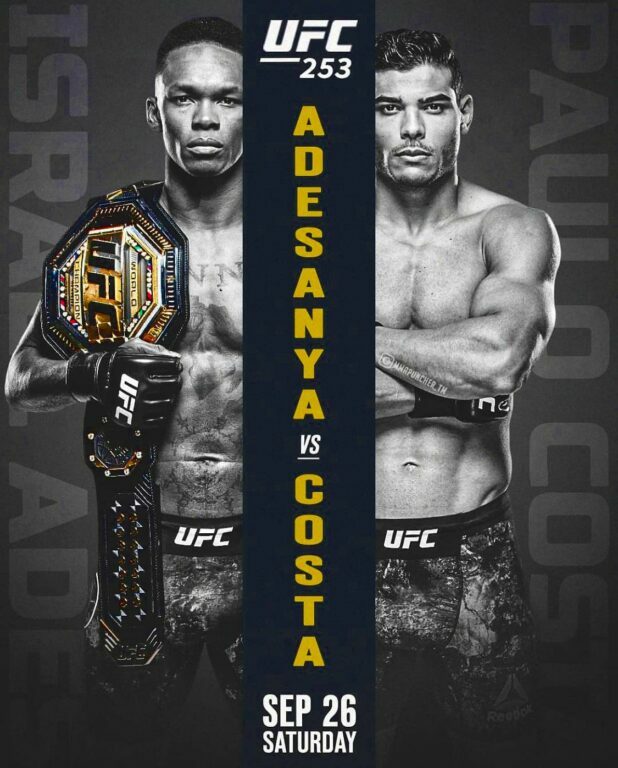 Back to the beaches, UFC returns to Yas Island, Abu Dhabi. Championship gold is on the line twice in one night. But first, a razor-close pick’em fight between Hakeem Dawodu and Zubaira Tukhugov is on deck. Also, bantamweight contenders, Sijara Eubanks and Ketlen Viera will help get the night started. Focus turns back to men’s flyweight in this featured barn burner. New Zealand’s Kai Kara-France looks to notch their first win of the night for City Kickboxing when he takes on the unorthodox, Brandon Royval. Legend and prestige hang in the balance, as UFC 253 main card preview underscores the battles necessary for stardom.

In one of the biggest cards of the year, fight island is back with two exhilarating title fights. First to throw leather are top contenders Dominick Reyes and the Polish, Jan Blachowicz. Now that Jon Jones has vacated the title, it will be the first time in almost a decade that someone other than Daniel Cormier and Jones is named the champion. Despite the shadow of Jones, the rightful two contenders will compete for the vacant title. Regardless of who wins or loses, the UFC 253 main card will witness the dawn of a new era in the light heavyweight division.

It is not often two fighters with undefeated records meet in the octagon. However, it is downright rare when two undefeated, unstoppable forces collide with each other in a championship bout where the winner takes all. The defending middleweight champion, Israel Adesanya squares off against violent powerhouse, Paulo Costa. Not only is bad blood boiling, but Adesanya looks to make a statement after admitting to his stale performance against the Cuban, Yoel Romero. Unlike Adesanya, Costa admits to never being in a boring fight, his style simply doesn’t allow it. Suggesting that the champion looks to evade more than strike, Costa says he will bring the fight to Adesanya. Stay locked into this UFC 253 preview as we dive into what’s on the line this Saturday.

On paper, the closest fight on the main card pits Dawodu against Tukhugov. At one point heralded as the next big thing from Canada, Dawodu’s striking is aggression personified. He likes to put combinations together but focuses his energy on leg and body kicks to create openings. Commonly exiting the clinch with kicks to head, he has great finishing instincts. Upon reflection, it would serve Dowodu well to avoid going high with his kicks against Tukhugov. Since it is much easier to catch high kicks, it is safer for the striker to keep his kicks low. This observation is validated by Tukhugov’s incredible top pressure.

Consequently, Tukhugov’s top pressure will serve as an effective weapon especially while training at American Kickboxing Academy (AKA). The AKA athlete showed more than grappling in his draw Lerone Murphy. Tukhugov showed his power when he knocked Murphy down early. While it is clear Dawodu has faced stiffer competition, it’s alarming that his conditioning deteriorates at the fight goes on. UFC 253 main card preview demonstrates the importance of conditioning, and for that reason, Tukhugov’s chances are favoured.

Moving down the card, Eubanks makes a quick turnaround against brawler, Viera. An offensive dynamo, Viera likes to rush into the pocket to throw a flurry of nasty hooks. Additionally, she is a well-rounded athlete who holds her own on the ground. Evidently, Viera would show her grappling prowess in her 2018 fight against former title challenger, Cat Zigano. Viera would trap Zigano’s leg with her knee and show the world her dangerous ground and pound.

Eubanks will look to keep her momentum rolling. She has a diverse arsenal and uses raw strength to her advantage. Even though she struggles to make weight often, when that issue is rectified, she gives most of the division problems. In fact, the Ultimate Fighter competitor put on an amazing performance against Maia Stevenson while competing on the show. Eubanks locked in a kimura over Stevenson and illustrated why her strength is such a weapon. If Eubanks focuses on position before submission, it could be a rough night for Viera. Conversely, if Viera lands in the clinch she can turn this into a dogfight.

Training out of Factory X with the likes of Anthony Smith and James Krause, Royval is looking for another crafty finish. Opposite to him is City Kickboxing owns Kara-France. Emphasizing volume, France’s activity often puts him ahead on judge’s scorecards. For instance, France’s striking defence was on display against striking phenom, Tyson Nam. Similar to what Colby Covington enacted against Tyron Woodley at UFC Vegas 11, France used elbows and hooks on the break of the clinch. Above all, France uses volume to get ahead on the scorecards but is quite sound fundamentally.

France’s camp has momentum, but Royval is a crafty athlete with unorthodox finishes. Typically when Royval competes he wins by finish. For example, against former title challenger, Tim Elliott, Royval shocked the world with a slick arm-triangle submission in the second round. While the fight favors France in the stand-up, Royval’s active guard is a sight to see and will definitely pose problems if the fight gets to the ground. As a result, UFC 253 will preview the abilities of each main card fighter and how they deal with adversity.

The light-heavyweight division erupts this weekend with the vacant title up for grabs. Competing for supremacy is Polish powered, Blachowicz facing off against the towering, Reyes. After his devastating knockout wins over Luke Rockhold and Corey Anderson, Blachowicz earned himself a title shot. Since Jones secured a victory over Reyes, most agree it’s Blachowicz’s turn to fight for the belt. Fighting in Jones’s shadow, Blachowicz and Reyes will light up the UFC 253 main card this Saturday.

What easily could be its own main event, Blachowicz and Reyes will put on a show while imposing their game plans. Reyes always utilizes his range, while the Poland native possesses more compact power. Namely when Blachowicz clinches he finds great success in striking while exiting the pocket. He highlighted this strength against Rockhold. During the second round, Rockhold breaks the clinch only to absorb a probing right hand a huge left hook from Blachowicz. Consequently, Blachowicz potency in the clinch combined with his short-range punching power will give Reyes problems.

Unlike Blachowicz’s use of close combat, Reyes uses his length to keep opponents on the end of his strikes. More importantly, Reyes uses distance to keep himself from absorbing damage. An incredibly useful skill of a man his height, Reyes showed a mastery of distance in his title bid against Jones. For instance, Reyes used distance and takedown defence to keep the fight standing for the first three rounds. His ability to bounce into range, unload a combination and exit safely nearly won him the title. Apart from this, he was able to land consistently with his left hand a wide array of punches. Since Blachowicz is so strong in the clinch, Reyes height and reach will give him a distinct advantage. This UFC 253 main card will preview a changing of the guard in the light-heavyweight division.

Costa will meet the Nigerian born, undisputed champion, Adesanya in a battle to determine the best middleweight in the world. Both undefeated juggernauts, there is no secret to the Brazilian brawler’s game. Close the distance with massive body kicks, then get inside and batter the body with hooks until the chin opens up for attack. While the strategy seems simple enough, Costa’s constant forward pressure is calculated. Depending on the opponent’s stance, Costa is able to switch body kicks to keep pressure on. Each time he meets in the clinch is like a car crash. The closer range striking favours Costa. Conversely, Adesanya will need to manage distance perfectly, and pick his shots carefully to overcome the undefeated Brazilian.

The Bull and the Matador

Fighting a foe who has never been finished, the champ has a tall order in front of him. Seldom is there a championship bout of this magnitude, and with the danger Costa represents, the margin for error is minimal. Adesanya’s striking defence is paramount since Costa has one of the highest output rates in the UFC. With that in mind, distance management will determine the next middleweight champion. While Adesanya can strike in close quarters, he won’t have the same power on his shots that Costa can produce. Therefore, staying on the outside or mid-range, and careful shot selection will be the story of this fight. Get ready for all the action with our UFC 253 preview where we find out how and who walks away with gold this Saturday.