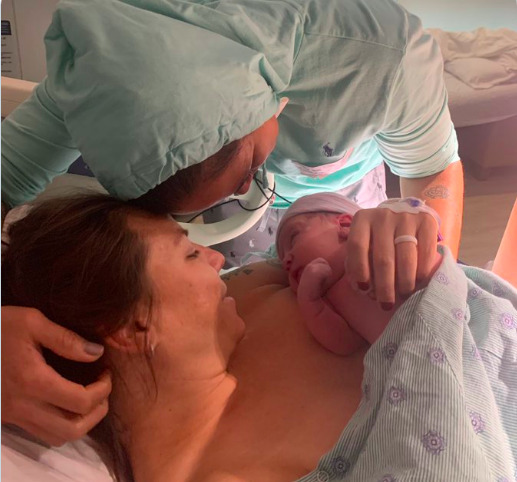 Once again being the first in the organization, queen of the bantamweight and featherweight division, Amanda Nunes and Nina Ansaroff announced the birth of their daughter early this Friday morning. Upon welcoming their first baby, Ansaroff went to Instagram to exclaim, “Raegan Ann Nunes is here! I am so in love! I can’t wait to show you the world!”

One thing is for sure, contenders like Michelle Watterson and Mackenzie Dern are waiting in the wings behind her. With hopes of becoming the first mom-champ not materializing, Watterson and Dern will have to put that dream on hold and settle for the runner-up prize. In the meantime, we can all appreciate the monumental moment of welcoming our first baby into existence. Nunes and Ansaroff welcome their first baby amidst a pandemic and the lioness will now have a little cub to fight for.

The first mother to become a UFC champion, Nune’s tweeted, “speechless”. Nunes and Ansaroff welcome their first baby into the world. A natural trailblazer, Nune’s continues to dominate inside the cage. Consequently, the double champ has accrued a record eleven fight win streak. The Brazilian powerhouse is also the first women to successfully defend two titles while holding the belts simultaneously.

As the promotion’s first women’s double champ, Nunes is set to return to action at UFC 256 Dec. 12. She will face off against Megan Anderson for the featherweight championship. Slowly but surely the UFC is adding to the division. Consequently, we saw on the Dana White Contender Series the president sign Danyelle Wolf into the 145 pound class. Conversely, after coming up short against Tatiana Suarez at UFC 238 last July, Ansaroff will likely make her return some time in 2021. After Nune’s and Ansaroff welcome their baby, all eyes will be on them for their return to the cage.