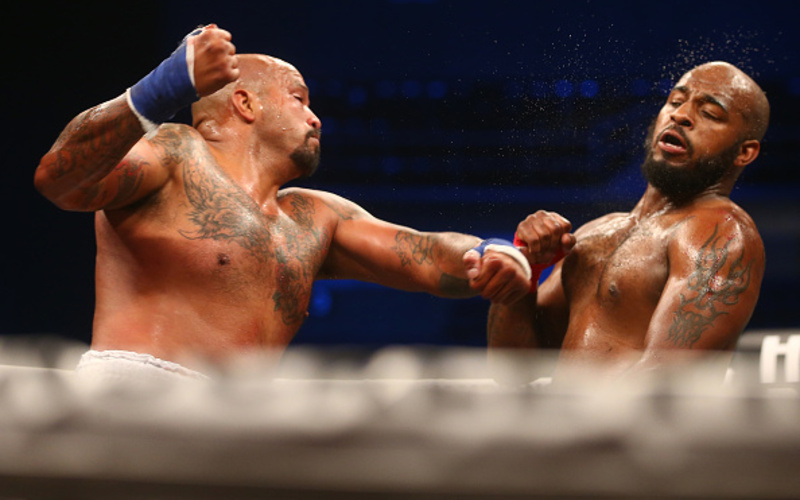 We’ve got your Bare Knuckle FC 13 results and recaps live as they happen tonight. The fighters are back and ready to toe the line in a great night of action that features two world title fights.

In a clash for the heavyweight championship, Joey Beltran will defend against the talented and dangerous Marcel Stamps. It’s a can’t-miss fight that is certain to provide blood, guts, and more than likely a knockout finish.

Competing for the lightweight championship, former Olympian Nico Hernandez will step into the ring against Chancey Wilson. It will be interesting to see how Nico Hernandez’s skills carry into bare-knuckle boxing. Bellator veteran Dave Rickels will also be making his debut as well.

For a preview of tonight’s card before the action kicks off, click here.

Recap: The heavyweight championship started with both fighters trying to find their range. Marcel Stamps was the longer and quicker fighter while Beltran held the power edge. Stamps did a good job sitting down behind his jab and landed some nice lead left hands as well. The first-round went to Stamps. Marcel Stamps did a good job utilizing his reach advantage and landed straight lefts on multiple occasions. Stamps again did enough to win the round.

The third round saw more of the same as Stamps landed more shots and avoided the power of Joey Beltran. Joey Beltran landed some bigger shots to end the round, and he began to turn the tide a bit. Beltran lost the round but is starting to find his way inside. Beltran landed a big right hand.

Joey Beltran landed a shot that looked to hurt Stamps and dropped him. The referee called it a slip, which it wasn’t. It was a clean shot and Beltran should have been awarded a knockdown and perhaps a TKO. Joey Beltran landed a straight right that dropped Stamps. Beltran opened up on Stamps and Stamps was again knocked down and could not get up. Beltran wins via TKO! Not a great job by any stretch by the referee in this bout. Big win, none the less for champion Joey Beltran.

Nico Hernandez def. Chancey Wilson via TKO (Dr. Stoppage) at 2:00 of Round 4

Recap: A great round to open the co-main event. Both fighters were active and showed speed and good footwork. Each fighter had their moments but Nico did enough to win the round. Both men were cut entering the second round. Nico had better technical boxing and scored more in the second round, but Chancey Wilson was not afraid to engage. While neither boxer landed anything tremendously damaging, Hernandez did enough to win the round.

Wilson landed his best shot of the right, a short right hand, but Nico Hernandez took it well and kept moving forward. Wilson appeared to get clipped and knocked down, but it was ruled a slip. Plenty of action in the third, but Nico Hernandez just continues to get the better of it, and leads 3-0 on the cards.

Chancey Wilson was reprimanded by the referee for flipping the bird to Nicco after Hernandez was talking trash. Chancey Wilson was competitive but Nico Hernandez just had the speed and skill advantage. Four rounds to none on the scorecards. Wilson got sick between round and was throwing up in his corner. That was enough for the doctor to call an end to the fight, who wins via TKO

Recap: Rickels showed a power advantage and nearly scored a knockdown in the early going with a right hand. He later landed a big uppercut. A big first round for Rickels, who did enough to win the round. Rickels did a great job working behind his jab and landed a major left hook that nearly dropped Wright. Both rounds were won handily by Rickels.

Rickels did more than enough to win the first three rounds, and he dominated the action inside the ring. He came out in the fourth looking to finish the fight. Wright showing a very good chin throughout the first three-plus rounds. They halted the action to work on a cut on Wright’s left eye but the fight continued. Another round in the books for Rickels who is up 4-0 on the cards.

Everyone knew Wright needed a finish in the final round, but it looked really unlikely. In fact, Dave Rickels did the majority of the damage and won the round, earning a unanimous decision.

Bill Dieckhoff def. Austen Levine via TKO (Punches) at 1:54 of Round 1

Recap: Bill Dieckhoff came out firing and dropped Levine with a big uppercut. These are two big heavyweights and Levine was again dropped by a left hand. He beat the count only to be dropped yet again. The referee came in and waived the fight off, giving Bill Dieckhoff the first-round TKO victory.

Recap: Brandon Johnson landed the better strikes as the round began but ran into a counter right hand that dropped him. Isaac Doolittle fought smart and didn’t rush in and instead landed a handful of well-placed strikes to win the first round 10-8. Much slower second round and both fighters seemed to coast a bit. Doolittle suffered a cut not much else happened.

This fight has become almost painful to watch. Both men are throwing occasional single shots. Dolittle likely has gained control over the scorecards, but both fighters need to pick up the pace. Johnson needed something big in the fifth round but was unable to put Doolittle in any jeopardy. He won the round but lost the fight.

Recap: Good first round as the boxers both showed their skills and speed. Jack Frericks was busy doing a lot of talking, but Hernandez landed more shots and fought behind the jab winning the first round. More of the same in round 2, as Hernandez did more punching and despite not landing anything of note, did enough to go up 2-0 on my scorecards. This isn’t a great fight, but Frericks did enough to win the third and trails 2-1 heading into the fourth round.

Hernandez opened up in the fourth round and landed some big shots cutting Frericks to the cheek and nose. Frericks complained about a poke in the eye at the end of the fourth, but he lost the round and needs a stoppage heading into the final round. Frericks needed to do something dramatic in the final round but was more content to talk and taunt Hernandez. Antonio Hernandez did enough to win the round and the fight.

Recap: Unreal! Both men came out throwing hammers from the start. Rowdy Akers started getting the worse of the deal and had cuts on both eyes. Major swelling to Akers and he ate a wicked uppercut and that dropped and finished Rowdy Akers. First-round knockout by Hermreck in under a minute!

Recap: Jon Hollis came out fast, but was immediately countered and suffered a cut to the left eye. Hollis was bothered throughout the round by the cut and was hit with a flush 1-2 that hurt and dropped Hollis. Big KO victory for Fred Pierce who looked calm and fought a smart fight.

Kendrick Latchman def. Miles McDonald via TKO (Punches) at 1:41 of Round 2