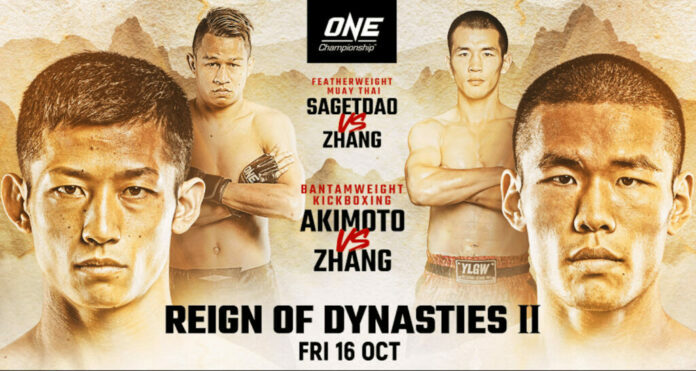 On Friday, October 16, ONE Championship returns with ONE: Reign of Dynasties II. The previously recorded event from Singapore will feature six bouts, including two mixed martial arts contests.

Interestingly, each bout features an athlete from China looking to make their way up the ladder in their respective divisions.

Atop the bill will be a ONE Super Series kickboxing bantamweight match between Japan’s Hiroki Akimoto and China’s “Muay Thai Boy” Zhang Chenglong. Akimoto will be moving up in weight to take this bout and try to make a statement in the bantamweight division.

And he will be jumping into the deep end of the pool.

Zhang dropped a decision to Alaverdi “Babyface Killer” Ramazanov for the inaugural ONE Bantamweight Kickboxing World Championship last December. A win over the incoming Akimoto would get him closer to a rematch.

The first of two mixed martial arts affairs on the card will occur in the strawweight division where Japan’s Ryuto Sawada will meet China’s Miao Li Tao.

In the other mixed martial arts bout, China’s Tang Kai will welcome back Malaysia’s Keanu Subba in a featherweight tilt.

Subba has been out of action for over a year. In May 2019, at ONE: For Honor, Subba broke his tibia and fibula when an inside leg kick was checked against Ryogo Takahashi. After a successful surgery to repair the damage, Subba has been rehabbing for his comeback.