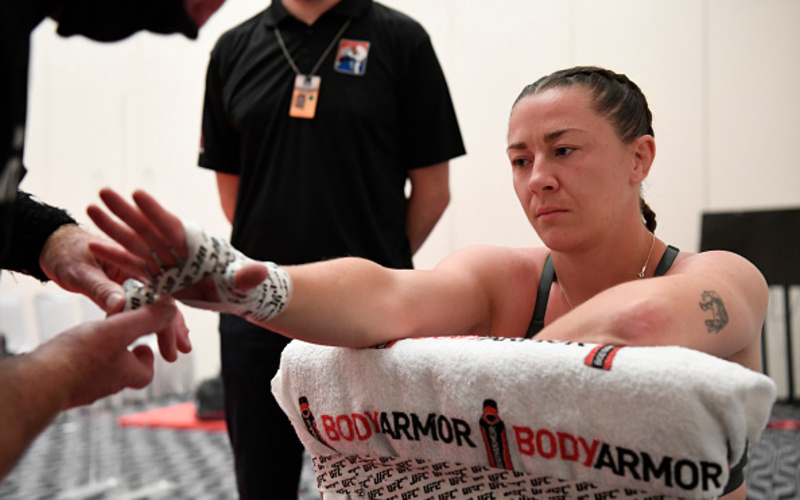 England’s sweetheart, Molly McCann is set to face off against Brazils, Lara Procopio. This will be McCann’s first fight since dropping her fight to Talia Santos. Procopio has been out of action since her unsuccessful UFC debut to Karol Rosa back in August. This bout is set to take place on February 6th, location TBC. The only other fight confirmed for the event is Nicco Montano vs. Karol Rosa. The fight was first announced by Jim Edwards.

Molly McCann came into the UFC with a lot of hype. Riding a six-fight winning streak prior to entering the big leagues, McCann was matched with Gillian Robertson. She was, however, the CageWarriors champion and was to debut in her hometown, Liverpool. Despite being choked out by Robertson (many have previously and many will in the future), McCann bounced back.

Three back to back victories, including dominating the highly touted Ariane Lipski, McCann broke into the top 15. Although she was largely outclassed by the Brazillian Santos, she never gave up. One of the most game fighters in the 125lbs division, Molly McCann is always an exciting watch.

We don’t know an awful lot about Molly McCann’s opponent, Lara Procopio. What we do know is that prior to the UFC she held an impressive 6-0 record. In her debut, however, she did show great output. Attempting 294 strikes, Procopio dealt with her wrestling failures well. Despite attempting five takedowns, she wasn’t able to land a single one.

This will be Lara Procopio’s first fight since a USADA suspension. Procopio tested positive for Ostarine, which is commonly found in ‘tainted supplements’.