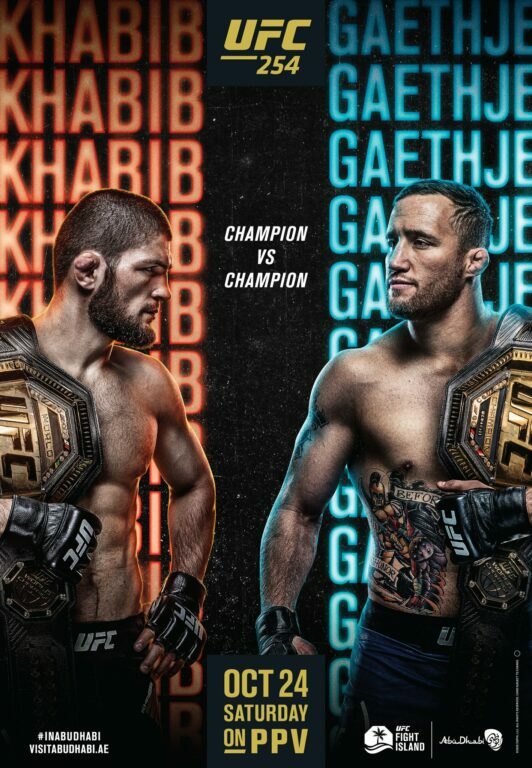 Finally, UFC 254 is upon us. The much anticipated final PPV of this series of Fight Island cards concludes with a lightweight title bout to determine the undisputed champion. Current champion and 28-0 phenom, Khabib Nurmagomedov will take on the interim champion, Justin Gaethje. The UFC have been hyping up UFC 254 lately on all of their social media platforms, releasing free fight to their YouTube channel as well as a fight breakdown.

One of the free fights that the UFC have made available is Justin Gaethje vs. Tony Ferguson for the interim lightweight title at UFC 249 back in May. In what was the fight of the night, as well as earning Gaethje a performance of the night bonus, ‘The Highlight’ TKO’d Ferguson in the final round. A dominant striking performance lead to Gaethje ending Ferguson’s 12 fight unbeaten streak. You can check out the fight here:

This fight needs no real introduction. Billed as ‘the biggest fight in UFC history’, Nurmagomedov dominated his way to a fourth-round submission victory over the UFC’s biggest star. The aftermath was almost as big as the fight when tensions boiled over, which arguably took the shie of ‘The Eagles’ magnificent victory. Since this bout, the champion has competed just once, submitting Dustin Poirier at UFC 242. You can check out Nurmagomedov’s fight with McGregor here: