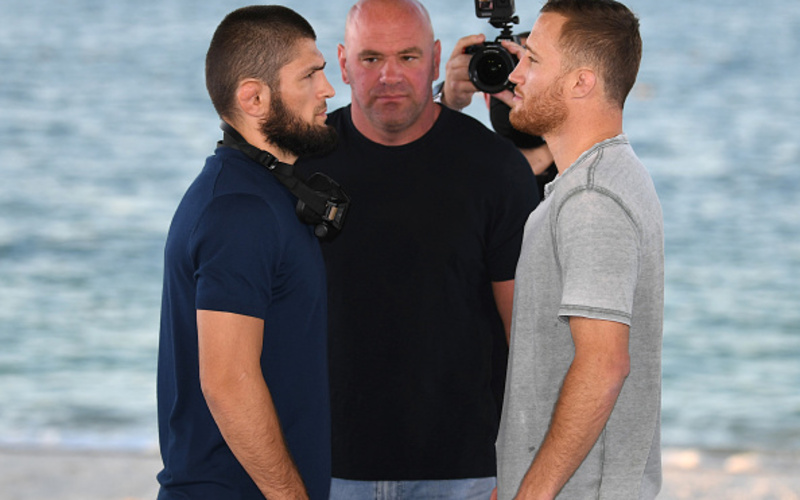 The UFC finishes its second stint at Fight Island inside the Flash Forum with UFC 254. In a legendary clash, reigning lightweight king, Khabib Nurmagomedov makes his awaited return to the octagon. Mourning the loss of his father and most studious coach, there were concerns the Dagestani native would never compete again. Now, he will continue his professional career without his most important strategist. The Russian’s dominance inside the cage will be challenged as Justin Gaethje looks to make history. The UFC 254 main event preview will take a comprehensive look at fighting mechanics and what’s at stake for the sake of legacy.

Nurmagomedov’s game plan is never a secret: take the opponent down and rain ground and pound on their face. His grappling prowess marries aggression and technique beautifully. While most are familiar with the “Dagastani handcuff”, the undefeated Russian uses grabs and holds to trap the foe’s limbs. For instance, early on against Conor McGregor, Nurmagomedov tied the Irishmen’s legs together by trapping them with his own. Stacking McGregor’s legs on top of each other while on the ground made escape even more unrealistic. You can catch the full Khabib vs. McGregor fight here.

Another example in which the American Kickboxing Academy product used his grappling strength was against Michael Johnson. Nurmagomedov faced slight adversity and finished Johnson by kimura. Altogether the champion has a variety of chokes and variations, from neck cranks to triangles. In the fight game, the words “Khabib” and “smash” go hand and hand. A mystique surrounds Nurmagomedov since he first entered the UFC. Initially, starting with the notion that he fought bears as a child. Fast forward to 2020, the UFC champion has only lost a single round… to the “Notorious” McGregor. Ultimately he turned the Irishman into another ruby on his championship belt, the UFC 254 main event preview examines mechanics involved in attaining victory.

When Gaethje entered the lightweight picture, he was all action — essentially an entertainment machine. War after bloody war, Gaethje and his brilliant coach, Trevor Whitman came to a realization. The methodical, patient Gaethje was a potent force. Likely occurring around the devastating knock out of James Vick. The American wrestler laid waste to the lightweight division. Going on to consecutively finish Edson Barboza, Donald Cerrone and Tony Ferguson all by strikes. Before, the narrative was that if Gaethje were to face Nurmagomedov, his only shot would be a puncher’s chance. Even though the American doesn’t rely on his NCAA Division I wrestling, Gaethje has promised to utilize his complete arsenal against the undefeated Russian.

Many have failed in their attempt to fend off the Eagle’s relentless attacks. The champion’s ability to weaponize pace through grappling exchanges becomes painful for the opponent. In order to take a big tree down, you have to chop it from the bottom. In short, Gaethje needs to utilize inside calf kicks to Nurmagomedov’s right leg since the champion stands orthodox. Targeting the champion’s right leg is important as wrestlers rely on that leg to shoot in for takedowns. Additionally, instead of headhunting, Gaethje can take control of the fight with body shots. Since Nurmagomedov’s game is reliant on conditioning, it would be advantageous to chip away with low-risk body shots. The champion is undefeated, Whitman and Gaethje must use their weapons to disable Nurmagomedov’s.

With Nurmagomedov’s desire to retire undefeated, legacy remains a cornerstone to this fight. However, he expressed his plans to retire after achieving a 30-0 record. Indicating the undefeated champion has one more fight left. Pivotal lightweight matchups are percolating, with McGregor and Dustin Poirier discussed as a possible route to establishing a rightful contender. All in all, the UFC 254 main event preview shines light on the legacy-defining performances that catapult fighters into superstars.