Leon “Rocky” Edwards, UFC welterweight, has just been removed from the official UFC rankings because of inactivity. This change was first spotted on the Japanese UFC Rankings page. Formerly the #3 ranked welterweight, the British fighter holds wins over Rafael Dos Anjos, Vicente Luque, and Gunnar Nelson. However, after his win over Dos Anjos last year, Edwards has not fought again. Belal Muhammad has moved into the rankings to take the #15 spot.

Before the COVID epidemic, Edwards was booked to fight then #1 ranked Tyron Woodley. However, travel restrictions imposed because of COVID made this impossible. In the meantime, Woodley lost to Gilbert Burns and Colby Covington in succession, and is currently ranked #6. Instead, Edwards has frequently pushed for fights against Covington (currently ranked #1), Jorge Masvidal (currently ranked #3) or Burns (currently ranked #2 and up for a title shot). He has also expressed interest, as many have, of being the first to fight Nick Diaz after rumours that the famous welterweight might return to the octagon.

However, none of his three selected opponents have expressed any interest in fighting Edwards. Burns already has a title fight booked against reigning champion Kamaru Usman. Covington seems dead set on trying to get a rematch with Usman or a fight with Masvidal. Finally, Masvidal seems open to either a rematch with the #12 ranked Nate Diaz, who he soundly defeated last year, or a fight with Covington.

Moreover, the fighters who have expressed interest in fighting Edwards have been refused. Edwards entered into a Twitter spat with Stephen “Wonderboy” Thompson, when the latter challenged him to a fight, saying that fighting the then #5 (now #4) ranked welterweight “does nothing for me”. He also turned down a possible fight with the unranked but highly touted Swedish prospect Khamzat Chimaev. The end result is that Edwards has not fought in 17 months, since his fight with Dos Anjos. It was likely because of this inactivity that Edwards was removed entirely from the UFC welterweight rankings. 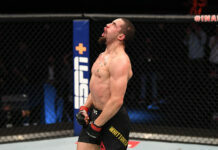