Saul ‘Canelo’ Alvarez has today been declared a free agent by his trainer/manager, Eddy Reynoso. The statement made via Reynoso’s Instagram and Twitter dropped earlier today and has shuck up the boxing world. Canelo has been out of action since his knockout of Sergei Kovalev in November of last year. On this occasion, he became the WBO light heavyweight champion.

The statement from Canelo’s manager and trainer, Reynoso suggests that Canelo has cut ties with Golden Boy, in favour of going forward as a free agent. Golden Boy’s president, Oscar de la Hoya is yet to pass comment on the story. We know the two have not seen eye to eye as of late.

If this is to be believed, which there is no evidence as to why it shouldn’t, Canelo will hopefully be fighting more often, against a better standard of opponent if he really wants to prove himself as the best. We know that he is dropping back down to super middleweight and that the likelihood of his next fight being against Avni Yildrim is very high. Despite this, if Canelo really wants to prove to everyone that he is the P4P king, he needs a step up in competition.

What is next for the biggest draw in boxing?

There seem to be a few options on the table for Canelo. Firstly, he stays a free agent, negotiates all his own fights, purses etc. This is a risky option because despite being boxing’s biggest PPV draw, without the might of a promotion behind him, he may not get the opportunities he previously got.

The next option is to sign with another promotion, with two main ones coming to mind. One of these is Eddie Hearn’s Matchroom Boxing. Why would Canelo go here? Hearn has some of the biggest names in the sport on his books, puts on huge shows, has a strong connection with DAZN and arguably most importantly, has Callum Smith as part of his stable. Smith is the WBA super middleweight champion and The Ring super middleweight champion. These are two belts Canelo would certainly be interested in competing for. Signing for Matchroom would make it much easier for this fight to come to fruition.

The third option is to swallow his pride and sign with Mayweather Promotions. Canelo Alvarez and Floyd Mayweather fought back in 2013 with Mayweather winning by majority decision. Since retiring, Mayweather has put much more emphasis on his promotion and is quickly becoming one of the big hitters. Could we see the former PPV king and the current PPV king unite to create some huge numbers? Only time will tell, but whatever Canelo decides to do next it will certainly be exciting. 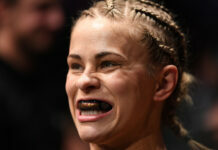