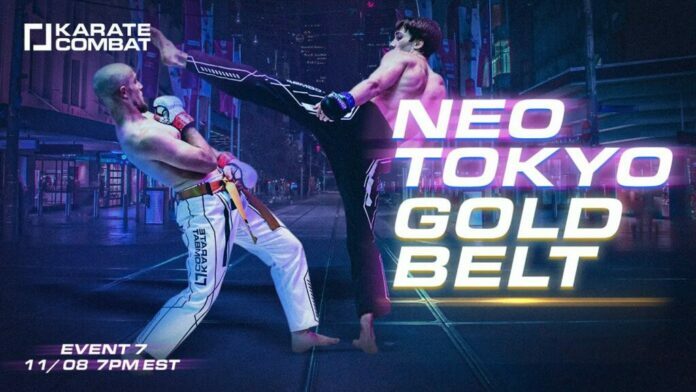 This piece will be another analysis of a Karate Combat championship match, the match between Edgars Skrivers and Myrza-Bek Tebuev. If you wish to read the previous piece, which analyzed the Joshua Quayhagen/Jerome Brown title match, click here.

Much like the previous championship fight, this one will have a fighter who uses more modern methods and a traditionalist. The representative of more contemporary methods in the previous fight, Joshua Quayhagen, was getting tagged on sloppy entries before eventually going to the body in the third and battering Jerome Brown to a TKO finish.  But unlike Quayhagen, who’s wildness on the lead nearly cost him against Brown, champion Edgars Skrivers is a cold machine who makes few wild errors.

In many ways, Edgars Skrivers represents the culmination of the techniques and tactics most effective in Karate Combat. A pressure fighter, Skrivers comes forward and eats up the space available immediately. This forces his adversaries to rely more on their guard and head movement rather than distance, the defense layer they are most comfortable with.

Like Brown, Skrivers goes to the outside calf kick frequently whenever opponents don’t open up. Unlike Brown, Skrivers usually has more success getting opponents to fire back since he often pressures extremely close. When Victor Rocha, a strong opponent in his own right reached for Skrivers as Skrivers hovered in almost head to chest, Skrivers responded with a vicious combination that knocked Rocha from his feet. Skrivers has shown a strong preference to counter rather than lead. But if he has to lead himself, Skrivers has shown an excellent ability to punch into kicks, a tactic that is relatively underused in Karate Combat.

Part of what makes Skrivers such a suffocating pressure fighter is that the pressure does not stop in any circumstance. In the clinch Skrivers is always clamping on his opponent immediately to deny them space if he has no space to work. If he does have space to work, he’s immediately hammering away with short hooks. Skrivers is also one of the best ground-and-pounders in the organization. When Teeik Silva was trapped at the lip of the pit and tilted over – no longer on his feet but not technically grounded either – Skrivers scampered up the 45-degree angle wall and belted Silva in the head with a soccer kick.

Rocha learned from two knockdowns and started immediately getting his head off-line after firing. But over time the leg kicks, bodywork, and relentless pressure took their toll. Rocha was not so much finished as pulped.

One of the most immediately apparent parts of Skrivers’s game is his guard. Skrivers stands with a far tighter, more compact and higher guard than most Karate Combat competitors. This is part of what makes him far less vulnerable to check hooks than say, Quayhagen. However, Skriver’s reliance on it forms the main weakness in his defense.

Rocha was able to split Skriver’s guard with straights, and was able to get some very looping hooks around it as well. Skriver also fought Rocha prior to the legalization of uppercuts in the Karate Combat ruleset. Uppercuts could bypass this guard entirely. When Rocha split his guard, Skrivers’s response seemed to be gluing his hands to his head ever more tightly. This means that he is very reluctant to abandon this layer of defense even after it has been penetrated. A wily opponent might be able to repeatedly exploit this fragility in the same way that Skrivers exploits the overreliance of many opposing fighters on distance management. The gloves are simply too small for Skrivers’s Dutch kickboxing-style high guard to be an option he relies on exclusively.

The result then, is that while Skrivers is hardly untouchable, as a complete package he is an uphill struggle. The previous championship bout was an intriguing matchup. But in this one, the challenger Myrza-Bek Tebuev should be considered a definite underdog. Tebuev, while extremely competent, very much fits the sort of standard mold of a Karate Combat competitor that Skrivers is primed to defeat. He is both vulnerable to counters coming in and not particularly comfortable in extended exchanges.

Tebuev compensates with tenacity, the willingness to pressure himself, and accurate kicks to the body and head. Indeed, he has improved very significantly since his first bout – going from a decisive loss to Rocha and a KO in a fight he was losing against Deivis Ferreras to getting a decision win over the powerful Daniel Viveros. However, Tebuev has not shown anything that would lead us to believe he poses a significant threat to Skrivers. In particular, he hasn’t displayed the boxing nuance that might indicate the ability to exploit Skrivers’s own weakness to uppercuts. Neither has he proven to be particularly elusive, which might defuse some of Skrivers’s pressure.

However, he certainly has some tools for victory. Tebuev has shown some of the best throws in the organization. If he can throw Skrivers before the latter can clamp on in the clinch, he could deny Skrivers his advantages on the feet at all. In addition, Skrivers’s dedication to the high guard does mean that his elbows are not always at his ribs. Tebuev, on the other hand, has shown a fair bit of proficiency with the roundhouse kick to the body, similarly to Quayhagen. If he can wear down Skrivers with this over the course of a five-round championship fight, Tebuev might be in with a chance. 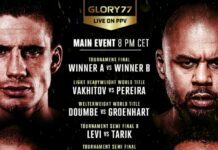 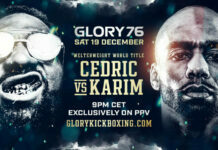