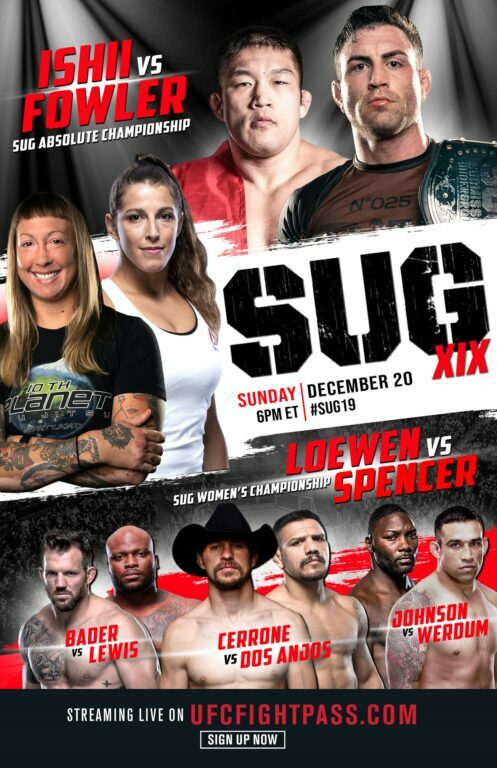 The Submission Underground 19 (SUG 19) main card was announced on Sunday afternoon and they are ending the year with a bang.

The main event will feature the absolute champion Mason Fowler taking on veteran submission grappler Satoshi Ishii. Fowler earned the title at SUG 17 in controversial fashion, but confirmed he is the SUG king in a rematch against Craig Jones at SUG 18.

In the evening’s co-main event, the women’s championship is on the line, as longtime SUG veteran Amanda Loewen takes on BJJ black belt and UFC fighter Felicia Spencer. Loewen has competed a number of times for SUG, most recently defeating UFC fighter Gillian Robertson at SUG 17. This will be Spencer’s first rodeo inside the SUG cage. The 29-year-old is coming off a loss to Amanda Nunes for the UFC women’s featherweight championship.

If that wasn’t enough, there are a slew of UFC fighters on the card as well.

Donald Cerrone will grace the SUG cage against Rafael dos Anjos. Ryan Bader and Derrick Lewis will do battle and Anthony Johnson takes on Fabricio Werdum.

The full fight card for Submission Underground 19 will be announced soon.