MMA Sucka has your Bare Knuckle FC 14 results and recaps as they happen. This might be Friday the 13th, but we’re expecting nothing but greatness from the latest BKFC card this evening. All of BKFC is must-see television, but Friday night features a main event that simply cannot be missed.

The 155-pound title will be on the line as champion, Luis Palomino defends against Jim Alers in a grudge match you’re not going to want to miss. The two had a dust-up at a previous press event that ended with Alers on the receiving end of a Palomino headbutt. They behaved themselves at the weigh-ins but you felt the energy between the two. When they finally step into the ring together, it’s going to be incredible.

In the co-main event, the 135 interim title was supposed to be on the line, but plans have changed. Unfortunately, Dat Nguyen was forced to pull out of his fight with Reggie Barnett Jr. Nguyen suffered an undisclosed injury and the fight has been scrapped altogether.

Taking its place as the co-main event Jake Bostwick will be taking on Tyler Vogel. The two had an intense back and forth at the weigh-ins and it should be a very good fight between two skilled and aggressive fighters. It will result in some glorious violence.

If you missed the BKFC 15 preview, you can find it here.

Recap: Both men came out firing and Alers ate a pair of right hands and dropped him. Alers was on the receiving end of another huge right hand and that was it! Huge first-round knockout by the champion!

Recap: Both men had their moments with the definitive punch being an uppercut landed by Vogel. It was a solid back and forth first round and I scored it for Vogel.

Bostwick pushed the pace early in the second round, looking to hand heavy shots. Vogel looked like the more technical fighter while Bostwick seemed the more powerful of the two. Bostwick landed a quick body shot and Vogel went down. Looked like a push to me but it was ruled a knockdown.

Vogel seemed to set his shots up better with his jab, while Bostwick just threw single shots. Nothing damaging landed from either side, but Vogel landed more and set up shots with his job. I’ve got it two rounds to one for Vogel, but the second is likely 10-8 based on the knockdown.

Vogel and Bostwick each landed some decent shots and at one point their feet got tied up and Vogel went down. It was quickly ruled not a knockdown. It was a fairly even round, but nobody landed anything too damaging. I have it scored 38-37 for Vogel.

Bostwick came forward like a bull but Vogel sidestepped him and landed a countershot. To be honest, I’m not sure if Bostwick has landed a dozen clean shots in the fight. Vogel ate a short right but Vogel landed a series of body shots as the bell ring. I had it 48-46 for Vogel.

It was ruled a draw and as such, we’re going to Overtime. There would be one more round with the winner of the round, winning the fight. Vogel came out and landed jabs and short right hands. Vogel was just the more accurate and active fighter and should be awarded the fight.

Brittain Hart def. Randine Eckholm via TKO (Referee Stoppage) at 1:21 of Round 4

Recap: Randine came forward from the moment the bell rang and looked to utilize her range. Brittain Hart had solid footwork and a more technical style. Hart landed a nice body shot. Eckholm was starting to show the damage she was taking. Eckholm had a big melanoma and a cut on her brow.

Hart consistently threw the jab to the face and head and occasionally sit down on straight right hands. It was a competitive round and Hart turned up the heat as the bell sounded. Paige VanZant did a good job with the commentary.

Hart stayed a lot busier in round three and controlled the action for the most part. Eckholm was swollen and cut as the round ended it looked like she might be running out of gas. Hart won another round on my card.

Hart turned up the heat in the fourth round and really start unloading to the body and head. Eckholm was hurting and took too many shots and went to the canvas. She beat the count but shook her head no as the ref told her to come forward. Eckholm was done and the referee stopped the fight.

Francesco Ricchi def. Noah Cutter via TKO (Punches) at 0:31 of Round 3

Recap: Both fighters came out and tried to find their range. Noah Cutter landed a right hand that dropped Ricchi to the canvas. He got back to his feet and most of his shots were falling short. He was again hit and dropped but continued. Ricchi was almost unable to stand and his mouthpiece literally was sent flying into the crowd. He’ll have a tough time coming back in this one.

Cutter opened the second round with a nice right hand and a solid body shot. Cutter ate a few shots and cuts opened up on his right eye. Ricchi began finding a home for his jab and had a much better round. Good back and forth to end the round.

Ricchi landed a big jab and then a straight right and down went Cutter. Cutter got back to his feet but was hurt and exhausted and decided against continuing. That’s it, tremendous comeback from Ricchi.

Recap: The fight started and Uly came right at Benedetto and landed one punch that knocked Benedetto out cold! Unreal!

Jarod Grant def. Christopher Johnson via TKO (Right Hand) at 0:24 of Round 3

Recap: This was a good first round, both men had their moments, but after a series of short uppercuts sent Grant to the canvas. Grant was hurt later in the round as well but managed to keep his feet and reach the end of the round.

Fun second round as both men landed big shots. Towards the close of the round, Jarod Grant anded some big right hands, the second of which sent Johnson to the canvas. Both men have scored knockdowns.

Jarod Grant opened the third round with a series of shots that wobbled Johnson. Johnson was unable to continue and that was a wrap! Big come from behind win for Grant.

Recap: I’ve never seen one fighter throw so many punches in one round of any fight ever. Eddie Hoch hit Jeff Chiffens with EVERYTHING including the kitchen sink and must have landed 100 clean shots. Chiffens was busted up and a bloody mess and survived the round. Clear 10-8 round for Hoch!

The second round didn’t last long as Eddie Hoch again landed a couple of shots that dropped Chiffens. Jeff Chiffens’ corner had seen enough and thankfully threw in the towel as the referee stopped the action. Dominating performance from Hoch!

Lorenzo Hunt def Davian Green via TKO (Right Hand) at 0:29 of Round 2

Recap: Decent first round, back and forth action but nothing too damaging landed by either fighter. Both fighters threw punches at the bell and the action was starting to heat up.

Lorenzo Hunt landed a couple of decent right hands that knocked out Green’s mouthpiece. After they replaced the mouthpiece, Hunt rushed in and hurt Green. They restarted the fight and Green didn’t want anymore and stopped fighting. The referee called a halt to the fight in the second round. Looks like Green was hurt to the jaw.

Kenmon Evans def. Sedric Johnson via KO (Punches) at 1:40 of Round 1 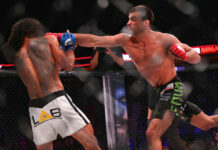