Bare Knuckle FC was back this past Friday night with BKFC 14 and it was a night to remember. There were many bright spots to focus on but we’ve chosen a few in particular that made the night super special. Luis Palomino defended his championship, Frank Mir was on location and we witnessed an amazing three-second knockout! If you missed the results and recaps, you can catch up here.

Whether you love her, or love to hate her Paige VanZant is a major player with BKFC. She was on hand to help call the action as Brittain Hart faced off with Randine Eckholm. VanZant did an admirable job calling the action and breaking down what was happening in the ring.

She will be making her debut Super Bowl weekend and Friday went a long way to uncover who she’ll be facing. After Hart finished Eckholm in the fourth round, she turned her attention to VanZant at ringside. She simply grabbed a microphone and said, “You’re f*cking next.” VanZant didn’t take it sitting down as she quipped, “that’s cute.” She then made her way to the ring where she and Hart went eye to eye and agreed to face off in February. It felt forced but it did what it was supposed to do. It built some hype around the fight and provided VanZant with an opponent.

Luis Palomino stops Jim Alers in One Round.

This card was built around the grudge match for the ages as Luis Palomino defended his 155-pound title against Jim Alers. The fight seemed perfect on paper. Two men who both love to stand and trade with the sport’s biggest prize in the balance. To be honest, I expected Alers to be too much for Palomino and thought his pace and power would turn the fight in his favor. I was wrong.

The two came out in round one and quickly got after it. That said, Palomino’s power was evident early and he dropped Alers. Alers got to his feet and shortly thereafter ate a right hand that sent Alers crashing to the canvas. That was all it took and Luis Palomino defended his title in remarkable fashion. The whole fight was less than a minute long and it leaves Luis Palomino as the clear pound for pound best in BKFC.

Frank Mir calls a fight and prepares for his debut.

Former UFC champion and grappling guru Frank Mir is looking to challenge himself. He’s done all you can do in the world of MMA, so he decided he’s going to step into the ring and fight for BKFC. His debut with the promotion hasn’t been announced but it would make sense for his debut alongside Paige VanZant at the much-hyped Super Bowl weekend show.

One thing Mir has always excelled at is calling the action from ringside and he was back at it Friday night. He was very impressed seeing the action up close and admitted it it scared him to potentially partake in the action. The kind of scared you feed off of. He will do well in the BKFC right and it’s going to be a blast to watch.

Just when you think you’ve seen it all inside the bare-knuckle boxing ring, you get surprised. Uly Diaz is a great boxer with heavy hands and a warrior spirit. He loves to come right out and attack. He’s not a fighter who’s going to sit in the pocket and measure his opponent. He acts as if he’s been shot out of a cannon and looks to land early and often.

Friday night he was taking on Donelei Benedetto and as soon as the bell rang, Diaz sprang into action and landed the first punch he threw, knocking Benedetto out cold in three seconds. It was the fastest KO in BKFC history and can bet that it’s not going to be bested anytime soon. 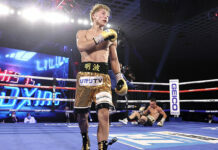 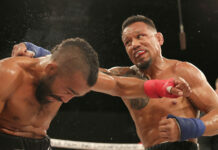