The UFC 255 weigh-ins took place today and nearly all the fighters showed up weight and ready to hit the scales. Mike Perry however showed up overweight and unable to make the professional agreed upon weight, missing the 171-pound limit. He weighed in at 175.5 pounds and will forfeit 30 percent of his purse to opponent Tim Means, who stepped in to replace Robbie Lawler. It wasn’t enough to just miss weight, Perry has been melting down on Twitter as well.

Before we get to that, we can report that both championship fights are set as Deivson Figueiredo and Alex Perez made weight for their flyweight title. Figueiredo weighed in at 125 pounds while Alex Perez came in at one-half pound under the limit at 124.5.

The other flyweight title fight on the card pits Valentina Shevchenko against Jennifer Maia. Shevchenko weighed in at a ready 124.5 pounds as did her opponent Jennifer Maia. It should be a fun fight, as long as Maia is able to get the fight to the canvas.

As stated earlier, Mike Perry has been melting down on Twitter about the weight cut and had the following to say prior to stepping onto the scale.

I’m sorry man. I don’t think I can make it

I have always talked trash during weight cuts so that if I couldn’t make it I could say I told y’all I wasn’t sure. Maybe I’ve outgrown this. I did try to ask for a fight at 185 but maybe I just don’t have it anymore. I’m so thankful to all the kind people at the @ufc 🙏🏻

Can’t believe I’ve even been here this long. Maybe I should just lay the gloves down. I don’t want it. I’m just in over my head with this weight. I was just 189 and now I’m 177 and I can’t sweat. I ran with a nice sauna suit , got in the portable sauna for 15 minutes , nothing

After missing weight, he had the following to say about the whole ordeal.

So easy for people to sit there and say shit but I swear I feel like anyone saying I’m weak for this doesn’t cut weight. It’s death to me. I’m dying already and have 6 more lbs to go. I know it doesn’t sound like a lot but it’s harder than the first 14.

The truth of the matter is that Perry has had plenty of issues outside of the cage. He has been accused of assaulting his ex-wife and has been in trouble more than once because of the things he says. If he could just live a normal life and show up like a professional he’d be ahead of the game but this is just another misstep for talented but troubled Floridian.

The rest of the weights for Saturday night’s fights can be found below. 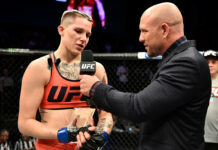 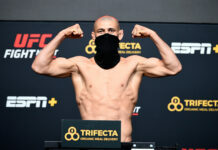 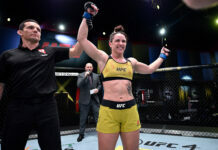