UFC 254, held at Fight Island in Abu Dhabi, was an electric event that culminated with the main event – Gaethje vs. Khabib. Although Nurmagomedov is widely regarded as the greatest of all-time, partly due to his incredible pressing style and partly due to his unparalleled unbeaten record, many thought Justin Gaethje could be the man to cause him problems.

Unfortunately, the night didn’t go how the US martial artist hoped, with the Dagestan ending the evening victorious once again. While it’s easy to claim that Khabib did his thing, it’s wrong to generalize. With that in mind, here are three things the world of MMA learned from Justin Gaethje versus Khabib Nurmagomedov.

The Most Dominant Fighting Style

The reason why fans thought Gaethje could spring an upset was due to his wrestling background. As an NCAA Division I All-American, it was clear that the University of Northern Colorado graduate would be better prepared than most of Khabib’s opponents when it came to stuffing the takedowns. In reality, the Dagestani’s dominant fighting style was too much for the American to keep at bay, even with his wrestling expertise and a ton of vicious leg kicks.

Gaethje tried hard and arguably won the first round on points, yet Khabib relentlessly battered away until he took his back and choked him out in front of his corner. If Khabib were to make it 29-0, the man in the other corner would probably be Tony Ferguson. However, even with his college wrestling resume, it would be hard to bet against the undefeated lightweight king.

Analysts, supporters and former fighters alike spent the evening, and the weeks and months leading up to the fight, trying to second-guess the outcome. The one thing the Justin Gaethje Vs. Khabib Nurmagomedov odds didn’t include was a shock retirement from the winner.

According to Khabib, he promised his mother he would never fight again after UFC 254, and we believe him. As Daniel Cormier said about the bout, Khabib isn’t the sort of guy to play games. If he says it, you should take him at his word. Therefore, unless he has a change of heart, and unless his mom gives him his blessing to return to the octagon, that could be the last the world will see of Khabib Nurmagomedov. Thankfully, the potential GOAT got his wish before he sailed into the sunset – he was promoted to the top of the pound for pound rankings.

Gaethje Will Be Back

There’s no doubt that Gaethje’s career is far from over. If anything, his loss against “The Eagle” has almost certainly propelled him into potential mega-fights in the future. Coming off an impressive victory against Donald Cerrone, Conor McGregor looks set to do battle with Dustin Poirier. If he wins, both “Notorious” and “The Highlight” have thunder in their fists, making the fight an exciting one for the fans.

Of course, Gaethje Vs. Ferguson 2 would get plenty of attention, especially due to the latter’s all-out style. Michael Chandler is another possible opponent, particularly as Khabib has vacated his belt, leaving the strap up for grabs and fans eager to see Chandler make his UFC debut. Whatever happens, Gaethje is very well positioned to earn back-to-back title shots and become the division’s new kingpin.

The biggest takeaway of the night? Don’t tell Jon “Bones” Jones he ain’t the champ #salty. 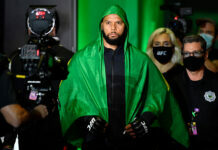 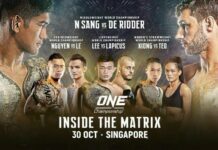 Inside the Matrix Full Event Preview