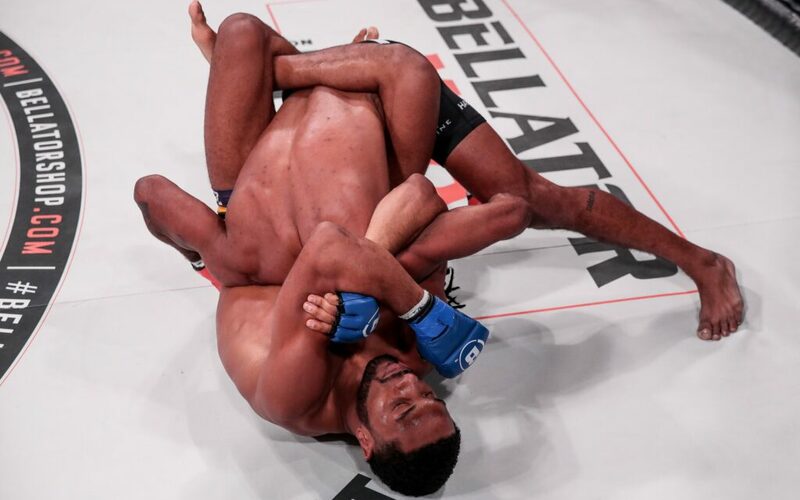 The pandemic has halted the momemtum of the Bellator Featherweight Grand Prix. However, AJ McKee restored that and then some with his victory at Bellator 253. We previewed the bantamweight rankings as it was announced that Bellator will adapt a rankings system moving forward. Arguably the best division in the promotion, featherweight has an excellent mixture of contenders and prospects. With that said, here’s a preview of what could debut as Bellator’s featherweight rankings:

McKee may have been the story of this week, but “Pitbull” headlined last week with his viral ko over Pedro Carvalho. Bellator’s double champ is the most accomplished fighter in the promotion’s history. He’s on a six fight win streak which includes a stoppage victory over UFC’s newly signed Michael Chandler. Pitbull will take on Emmanuel Sanchez in the semi-final of the grand prix.

AJ McKee’s submission victory over Darrion Caldwell at Bellator 253 is a front-runner for submission of the year. Improving to 17-0, McKee punched his ticket to the finals of the Bellator featherweight grand prix. In addition, McKee was able to silence some of his critics as he defeated another former Bellator champion. The “Mercenary” will finally get his title opportunity in his next bout.

“El Matador” is 20-4 and on a three-fight win streak. He finally gets his rematch against Pitbull after coming up short in their first title bout. The Roufusport product has never been finished and possesses some of the best BJJ in the division. Sanchez has an elite pace and if he’s able to use that to his advantage, it will certainly make his title bout a lot more interesting. Bellator’s featherweight rankings will be solidified as the grand prix comes to an end in 2021.

“The Wolf” fell short in his semi-final about against McKee, but Caldwell is still one of the best fighters in the division. Caldwell had two big wins over Adam Borics and Henry Corrales before the letdown. There’s still plenty of matchups at featherweight that are intriguing for Caldwell to make another title run.

Borics’ coming out party was his viral KO over blue-chip prospect Aaron Pico. “The Kid” was a darkhorse in the grand prix, but Caldwell ended that quickly. Borics has responded well with two decision victories since. Borics is 7-1 in the promotion and has a lot of marquee opponents in the wings.

Corrales has won six of his last eight. However, two of those losses came to Caldwell and bantamweight champ Juan Archuleta. Corrales was victorious over Brandon Girtz at Bellator 250 back in October. Corrales is set for another title run, but will have his work cut out for him.

The argument can be made that Pico is one of the top five fighters in the division. However, with losses against Borics and Corrales, Pico needs a notable victory to propel himself in the very elite at 145.

Carvalho suffered a brutal knockout to the champ and it would come as no surprise if he finds his way to the top again. “The Game” has not matched up with the division’s best so until then he’s on the outside looking in.

Burnell’s signing with the promotion did not garner the attention it deserved. Burnell is 14-3 and at 26 years old, he gives Bellator another contender at 145lbs. Burnell has only had 1 fight in the promotion, but keep an eye on him in 2021.