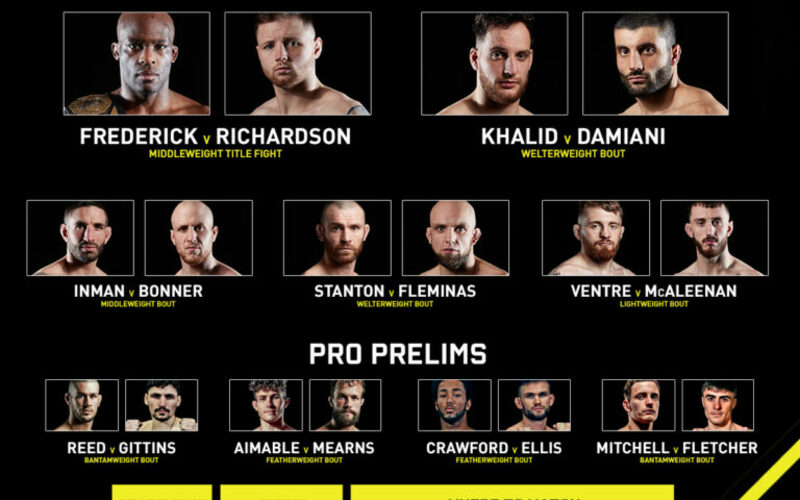 The main event will be a middleweight title bout between champion Nathias Frederick and Jamie Richardson. Also on the main card is another middleweight matchup between Matt Inman and Matthew Bonner, a welterweight clash pitting Mick Stanton against Madars Fleminas, and a lightweight fight with Adam Ventre against Decky McAleenan. Down at bantamweight, Josh Reed locks horns with Liam Gittins while Steve Aimable takes on Tom Means at a 150 pound catchweight In addition, the co-main will see a welterweight rumble between Leonardo Damiani and Aaron Khalid.

The card is rounded off by the prelims which will show two more bouts. At bantamweight Leigh Mitchell takes on Nathan Fletcher while Kingsley Crawford throws down with Ben Ellis at featherweight.

Nathias Frederick def. Jamie Richardson for the Cage Warriors Middleweight World Championship by KO (left hook) at 0:18 of Round 3

Decky McAleenan def. Adam Ventre by submission (rear naked choke) at 1:13 of Round 2

Liam Gittins def. Josh Reed by submission (triangle choke) at 1:08 of Round 2

Nathan Fletcher def. Leigh Mitchell by submission (rear naked choke) at 4:18 of Round 2