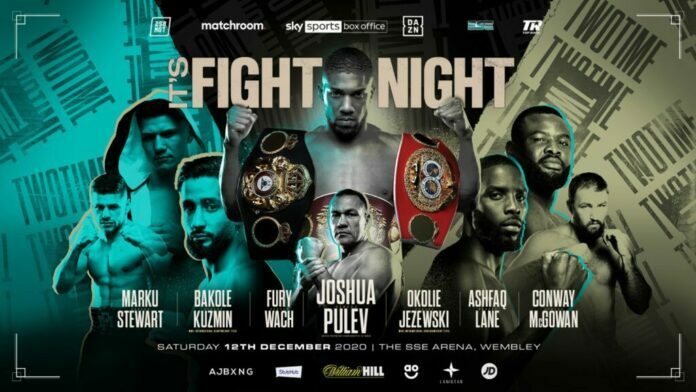 This Saturday night sees the return of Anthony Joshua as he takes on Kubrat Pulev and we have all the results for you right here. On what will be Joshua’s first fight since gaining all of his belts back against Andy Ruiz Jr in Saudi Arabia last December. His opponent on the night, the Bulgarian, Pulev, was most recently in action when he defeated Rydell Booker in a ten-round bout in November of 2019.

The undercard is also stacked. The event opens with a welterweight bout between Florian Marku and Jamie Stewart. Super-bantamweight follow them when Qais Ashfaq squares off against Ashley Lane. In an all British affair, we have Kieron Conway and Macaulay McGowan. Martin Bakole draws Sergei Kuzmin, who looks to bounce back from his first professional loss. Hughie Fury (who holds a loss to Pulev) faces Mariusz Wach. Lawrence Okolie also returns to face Nikodem Jezewski. Okolie was scheduled to face Krzysztof Glowacki for the vacant WBO cruiserweight title, however, Glowaki had to withdraw with a positive COVid-19 test. On this occasion, no title will be on the line. This will be the first combat sports event in the UK since March’s countrywide lockdown with 1000 fans allowed in attendance.