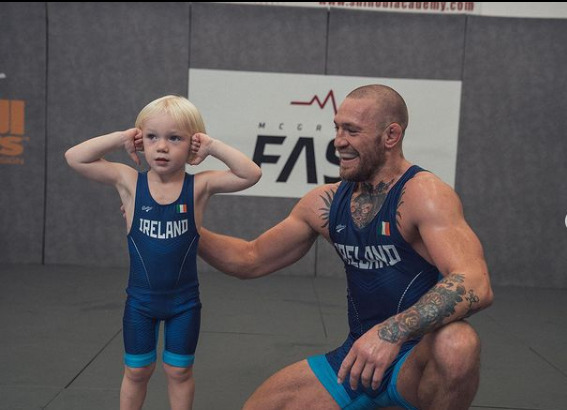 While training for his upcoming fight against Dustin Poirier, Conor McGregor has also been showcasing his son, Conor McGregor Jr. And from the looks of it, the youngster is going to follow in his father’s footsteps.

McGregor and his partner, Dee Devlin had their first child, McGregor Jr. in 2017. The boy has been raised around combat sports, as his father is one of the best in the game.

At the end of November, “Notorious” posted a photo of his son on his official Instagram page and it was captioned, “At work with my Protégé.”

On Tuesday morning, the 32-year-old Irish fighter posted a number of pictures of himself and his son, who is now three-years-old at his gym. The photos were taken in front of large signs for his newest venture, McGregor FAST.

Judging by the looks of some of his sons kicks, he’s on the fast track for success.

McGregor (22-4) has not fought inside the UFC octagon since January, when he TKO’d Donald Cerrone in the very first round at UFC 246.

The 32-year-old is set to face Poirier at UFC 257 on January 23. Along with that MMA match, it has been stated that he will face boxing legend Manny Pacquiao in early 2021 as well.