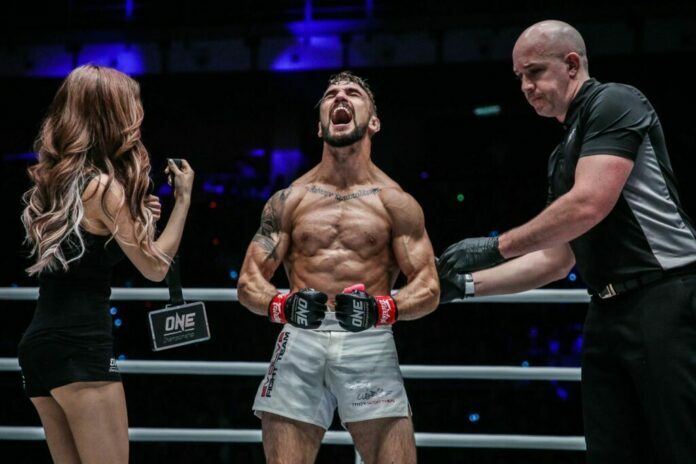 “Pretty Boy” Troy Worthen has shined since making his professional debut in 2015, and after joining ONE Championship in 2019, he kept his streak rolling with three consecutive dominant performances.

The American returns to action on Friday, December 18 at ONE: Collision Course against the #3-ranked bantamweight, Yusup Saadulaev. It is a big opportunity to pick up a victory and push his way into the official ONE athlete rankings.

Ahead of the pivotal contest, the undefeated American spoke with MMASucka about his 2020 and the upcoming match.

MMASucka: After your last outing, against Mark Fairtex Abelardo at ONE: King of the Jungle, where did you see yourself within the division following the decision victory?

Troy Worthen: I was excited, and I was looking forward to a very busy year this year. I was getting ready to get right back into camp and try to turn around and fight again in April or May. I was looking forward to having a four or five fight year. Obviously, that didn’t work out because of COVID, but I’m excited to get back and excited to get busy.

As far as being where I’m at in the division, skill set wise, I think I’m near the top.

I do think I’m one of the best in the world. Luckily, I got this call for Yusup Saadulaev, who’s #3 in the world right now. I’ve been calling for top names ever since I got to ONE Championship, and here’s my chance. I’m excited to go out there and show everybody that I’m going to earn my spot, and I’m going to fight my way toward the title.

MMASucka: How have you been staying active during the quarantines and various challenges COVID has presented during 2020?

Worthen: I bought a pair of kettlebells, and I would go out to the parking garage and workout 2-3 times a day.  During quarantine, I was probably in the best shape of my life just because out of boredom. I was working out 2-3-4 times a day.

That’s pretty much how I was spending my time because I wanted to be in shape and ready to compete as soon as the quarantine was up. When it was lifted, I was ready to compete, but unfortunately, the only shows we could do were in Thailand, and I couldn’t get across the borders. I just had to wait for my spot.

MMASucka: When you got the call to return to action, and it was against a top contender in the division, #3-ranked Yusup Saadulaev, what were your emotions? What was that process like?

Worthen: I was super excited. I had actually hit the matchmaker up and said, “Hey, man. I see that we’re able to get the guys from the United States on these cards again, so I’m ready whenever. What do you have?” And they told me they were booked out because they had all these fights from events that got canceled that they needed to get in the ring.

I stayed in the gym, and I was training; lucky for me, I was in the gym one morning, and I got a text from the matchmaker, and it said, “Hey, man, would you take Yusup Saadulaev?”

I said absolutely. That’s the name I wanted. I want the top five guys. I want to fight the top grapplers and test my skills. I was super excited and ready to go. It ended up working out even better.

MMASucka: What changes come with having a full camp to prepare for such a tough opponent?

Worthen: The biggest thing is going to be your conditioning. You’ve got a little bit more time to get your body in shape, a little more time to get with your coaches and drill the little details that you need to get right on fight night, but as far as my mindset – it’s all the same. I truly enjoy fighting. I love martial arts, and this is what I love to do. Short notice, long notice, it doesn’t really matter to me as long as I get to step inside of the cage.

I was just excited to have the opportunity to go do my job again. I don’t ever go off for long periods of time, so I’m always in shape, but I’m probably peaking perfectly now that I’ve had a full camp.

MMASucka: What strengths does Saadulaev possess, and what are the weaknesses you are looking to exploit during the match?

Worthen: There’s definitely no secret about it, Saadulaev is an amazing grappler. That’s what he does, and he does it very well. The problem for him is that he’s an amazing grappler once on the mat. I think getting the fight to the ground will be his biggest issue with me. He’s a fantastic grappler, and if we get into those exchanges, I’m going to have to mind my Ps and Qs and do everything correctly, or else I could get caught. That’s the biggest risk that he poses for me.

I’m just excited to go out there and bring the fight to him. I’m excited to compete against him. It doesn’t matter to me. I don’t study too much of my opponent’s film. I find a few tendencies, but I like to go out and fight with a free mind and not think about what they’ve done in the past.

MMASucka: You’ve recently made the change from Evolve MMA in Singapore to Sanford MMA in Florida. What changes does this bring to your game heading into ONE: Collision Course?

Worthen: I’m training at Sanford MMA with the likes of Aung La and Martin Nguyen. There are a million names there. It’s definitely a high-level room with all of the training partners and coaches. It’s a great environment, and I’m super happy to be here. The team welcomed me with open arms as soon as I came.

The shift is definitely a little bit different from being at Evolve MMA and Singapore, with the United States being gigantic and Singapore being tiny. Transportation and getting around is a little bit different, but I’m still on a very structured training schedule. When I was at Evolve in Singapore, I was training twice a day, five days a week, and in the morning on Saturdays. I’m still doing that here.

I’m pretty disciplined at all points, not just in fight camps but outside. I take this very seriously. This is my career and my job. There are no long off-weeks or vacations. I stay in the gym. I miss Singapore, I miss my team at Evolve, but I love my new team at Sanford. I’m super appreciative for them opening their arms to me.

MMASucka: Your stand-up game has come a long way already, how will Henri Hooft’s expertise bring your game to the next level?

Right now, we’re still very young in this partnership of working on my striking, so I think for this fight, you’re not going to see too much of a crazy change. Over time, the more time we work together, my striking will become world-class.

MMASucka: When the bell finally rings, what are your expectations for this bout after the layoff?

Worthen: I like to start hard and aggressive and fight at a high pace and make it exciting to see if people can keep up. I don’t plan on changing that at all.

I never go into a fight with too much of a game plan. I don’t know exactly what will happen, but I always push a hard pace, and I always have a lot of action in my fights. I think that will happen just the same.

From what I’ve seen from Yusup, he generally likes to control the pace of fights. He likes a slower pace, and he likes to fight in explosions. He explodes with a big combo or explodes into a takedown, and then it’ll probably be a 5-10 second lull in the action where he rests a little bit, and he’ll explode again. He likes to fight in little bursts, and I like to fight in constant pressure.

It’ll be my job to make sure he never gets in a rhythm, and the fight doesn’t end up happening in bursts. I need to keep constant pressure and make sure that we’re in exchanges, some kind of scramble, and I think he’ll wear out that way. If you’re training one way and constantly fighting one way, and then you have to fight a different way, it fatigues you more. You’re not ready for that. It’s not how you train. I think he probably trains like that in the room, in bursts, so I’m going to bring pressure from the opening bell and see if he can sink or swim.

MMASucka: Getting the win over the third-ranked contender will catapault you into the discussion of top contenders. If that happens, will you call for the championship?

Worthen: Especially with this year, I want to enjoy the journey. I’m not so much worried about the outcome or what’s next for me. I want to keep competing, and I’m happy to be competing again.

If ONE Championship thinks that after this fight that I’m ready for a title shot, I would absolutely take it, but I’m not going to be begging for Bibiano or anything like that. Anybody in the top five is a good fight for me. If it’s Bibiano, that’s also a good fight for me.

I won’t call for the title shot, but if they think I’m ready for it and I’ve earned it, I’ll absolutely take it. I think I am ready for it, but I’m just going to keep doing my job and show the world this is where I deserve to be. I’ll let the big man, Chatri Sityodtong, and everybody else make those decisions for me.

MMASucka: What is your prediction for the match?