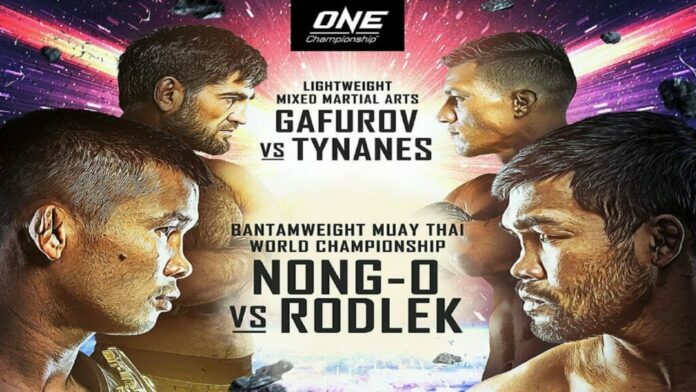 ONE Championship concluded their final live event of 2020, ONE: Collision Course, with two ONE Super Series title tilts at the top of the card on Friday, December 18, in Singapore.

No titles changed hands, but the champions put on a show.

ONE Light Heavyweight Kickboxing World Champion Roman Kryklia dominated Andrei “Mister KO” Stoica for five rounds en route to the unanimous decision. The reigning king was sharp early on and continued to find his opportunities throughout the bout.

Stoica remarkably absorbed it all and stayed standing. The contest showed his toughness, but he just couldn’t do enough offensively to stop the oncoming train that was the champion.

In the co-main event, Rodlek PK.Saenchaimuaythaigym started strongly against ONE Bantamweight Muay Thai World Champion Nong-O Gaiyanghadao, but the defending champ got off to a hot start in the third round and retained with a gorgeous knockout with a laser straight right hand.

Nong-O’s post-match interview included an intriguing callout of Giorgio “The Doctor” Petrosyan. Could we see that super fight in 2021?

The remainder of the card took place under mixed martial arts rules.

Both razor-close fights showed the promise in all four athletes, but veteran savvy won the day.

Yodkaikaew “Y2K” Fairtex picked up the biggest win of his career after he took home a split decision over Tatsumitsu Wada in a three-round affair. After the first round, “Y2K” stifled the grappling of Wada and used his leg kicks to accumulate damage.

In the opening contest, “The Hunter” Xie Wei looked outstanding against Chan Rothana. Xie’s striking was on point early, and in the third round he found the chin to drop Rothana to the canvas. From there, ground and pound came fast and furious until the referee made the stop.

ONE Bantamweight Muay Thai World Championship: Nong-O Gaiyanghadao def. Rodlek PK.Saenchaimuaythaigym by KO at 1:13 of the third round

Xie Wei def. Chan Rothana by TKO at 1:39 of the third round