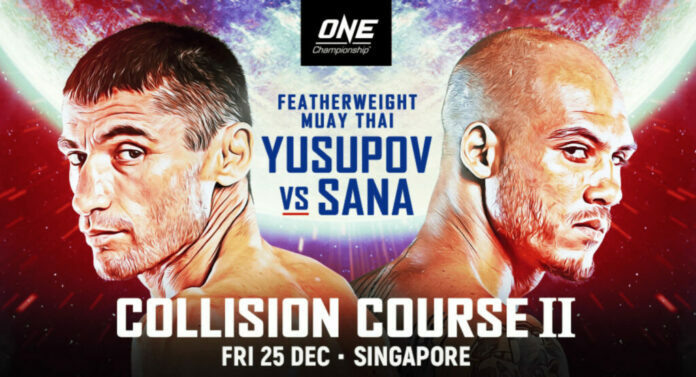 Santa will not be the only one leaving a present for you on Christmas morning. ONE Championship will kickstart the holiday with their final, previously recorded, show of 2020 with ONE: Collision Course II.

In the main event, featherweight Muay Thai specialists Jamal Yusupov and Samy Sana will compete in a key contender’s bout. Yusupov is currently ranked #2 in the division, with Sana holding down the #4 spot.

The mixed martial arts bouts on the bill look to excite as always. The global athletes will try to make one last impression before turning the calendars to 2021.

The co-main event features the #3-ranked flyweight contender defending his spot in the official ONE athlete rankings. Kairat “The Kazakh” Akhmetov will be challenged by South Korea’s “Ottogi” Dae Hwan Kim.

Amir Khan returns to action against “Crazy Dog” Dae Sung Park in what could be a sleeper for Match of the Night. The Singaporean will compete in front of his home crowd once again inside the Singapore Indoor Stadium.

The first bout of the night will be a 60.0 kg catch weight affair as Japan’s Senzo Ikeda goes one-on-one against Liang “The Little Monster” Hui.

As you unwrap gifts when you wake up, put on the hot and heavy action of ONE Championship to get an additional present from ONE to satisfy your martial arts desires. The action guarantees to be electric in their final event of 2020.

ONE: Collision Course II, a previously recorded event, will air free on Friday, December 25, on the B/R Live app.