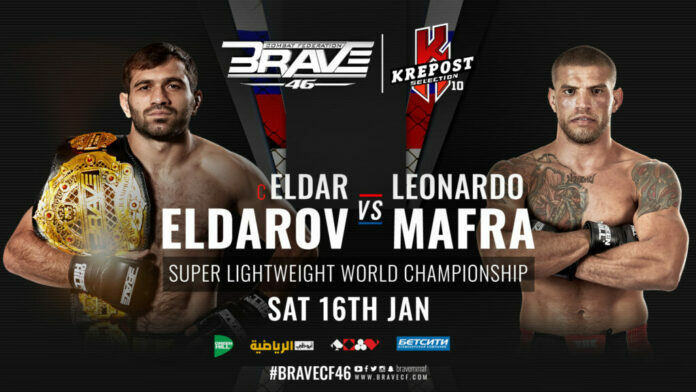 Brave CF will make their first trip to Russia and the promotion announced the official fight card for Brave CF 46.

On Saturday morning, it was announced the WOW Arena Concert and Entertainment Venue (Krasnaya Plyana Zone) would play host to Brave CF 46 on January 16.

The main event is a battle for the super lightweight world championship, as champion Eldar Eldarov takes on Brazilian Leonardo Mafra. Eldarov (12-1) has gone on an impressive run following a loss to Khabib Nurmagomedov in his second professional outing, going 11-0. He’s fought four times under the Brave CF banner and has earned decisions in all but one of those outings. Mafra (15-5) is 1-1 in his Brave CF career and most recently earned a decision victory against Djamil Chan.

The co-main event features former UFC flyweight title challenger Ali Bagautinov stepping inside the cage against Oleg Lichkovakha. Since his departure from the UFC, Bagautinov (18-7) has gone 5-2. This will be his Brave promotional debut and he is coming in on a high, as he earned a decision victory against Andrey Kalechits at Kold Wars 2 in November. Lichkovakha (15-4) is also making his Brave debut and is 6-1 in his past seven fights. Most recently, he tapped out Anton Rachkov via rear-naked choke at BFC 62.

The nine-fight Brave CF 46 card goes down on January 16 from Sochi, Russia.

Keep it locked to MMASucka.com for more on Brave CF.