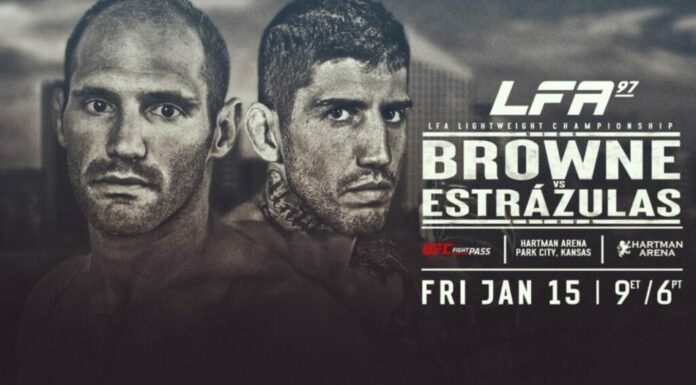 LFA 97 should be a great card!

LFA has been on a brief hiatus but returns in a big way Friday night as Nick Browne will face Arthur Estrázulas to crown a new lightweight champion. Nick Browne has won three fights in a row heading into this title fight and will look to leave Park City, KS with sixteen pounds of gold around his waist.

Standing in his way in Arthur Estazulas. He holds a 12-4 record and enters this fight having won four of his past five fights. The Kings MMA product is very well rounded and will present a stiff test for Nick Browne.

In the co-main event, Jacob Rosales will take on the very talented Jose Martinez. Rosales is coming off a loss in his last contest. He was also defeated in the Dana White Contender Series. He’s more talented than his 12-6 record would indicate and he’ll be looking to rebound with a victory Friday night.

Jose Martinez has won three fights in a row and four of his last five. He has a record of 11-4 as a professional and a win here would put him in the upper echelon of the lightweight division.

Also in action, Friday night is Loveth Young who has a 2-1 record. She’ll be competing against Kelly D’Angelo who owns a record of 4-3 and enters this fight after losing to Alesha Zappitella in Invicta FC. For a reminder of how LFA 96 went, click here.

We will have live results from the card as they happen Friday night. Make sure you swing by and take in the action.