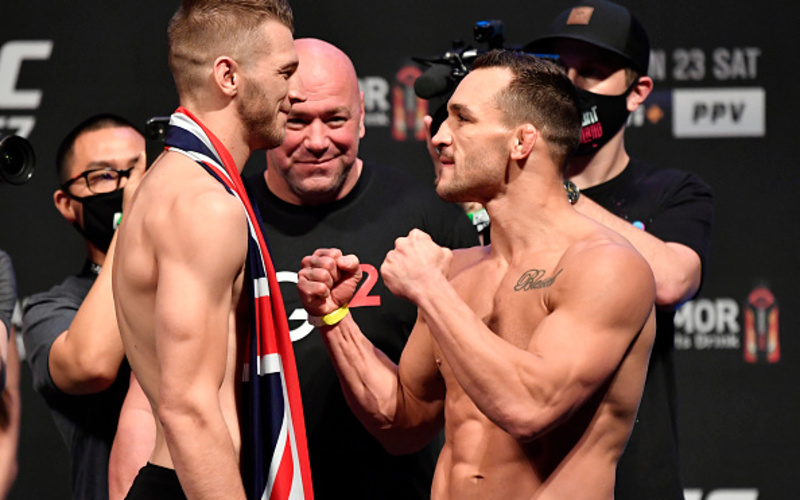 MMASucka staff picks are locked in place for a must-watch night of fights. Tonight, January 23 will see UFC 257 take place from “UFC Fight Island” at the Etihad Arena in Abu Dhabi. The main card will begin at 10:00pm ET (7:00pm PT) live and available for purchase on pay-per-view through ESPN+.

Make sure to check out our picks from last weekend’s UFC on ABC 1 and Wednesday’s UFC on ESPN 20.

Two thrilling lightweight pairings will headline the first PPV of 2021. The main event features a rematch between Dustin Poirier and Conor McGregor in what could be a title eliminator. Poirier has looked the best of his career, sitting at 5-1 through his last six with a lone defeat in a unification of belts to Khabib Nurmagomedov. The former interim champion would recover in June last year in a fight of the ages with Dan Hooker, scoring the unanimous decision. His opponent, McGregor, made quick work of Poirier with a sub two-minute knockout in their first meeting over six years ago. The Irishman has contested once since losing his belt to the aforementioned Nurmagomedov; that coming in just 40 seconds by knockout over Donald Cerrone last January.

Dan Hooker and Michael Chandler are set for combat in the co-main event. Auckland’s Hooker looks to bounce back after his 2020 “Fight of the Year” defeat to the above-mentioned Poirier. Former NCAA wrestler Chandler makes his promotional debut after a near ten-year stint and multi-time championship reign with Bellator.

A violation of COVID-19 protocols Friday from Ottman Azaitar saw his removal from the event and promotion. As a result, his pairing with Matt Frevola resulted in the fight being taken off the main card. Although Frevola will still compete against a new opponent, only four fights will be counted for our staff picks. See those for UFC 257 further below.

Throughout the calendar year, staff picks will be composed of main card fights from UFC and Bellator MMA events. PFL will make its debut beginning in April, along with an additional promotion to-be-determined this weekend.

The WINNER of staff picks in 2021 will have a choice between receiving a custom-made championship belt from ProAmBelts or chain from Championship Chains. For the third straight year, Michael DeSantis captured the 2020 victory compiling a record of 201-88. Connor Deitrich came in second with a 199-90 record, the tightest MMASucka season yet.

See who the staff is choosing to win at UFC 257: Poirier vs. McGregor 2 below.

Staff Records after UFC on ABC 1:

*Note: Not all staff pick for every event*
*Note: UFC on ESPN 20 picks will be added to the above records NEXT weekend*