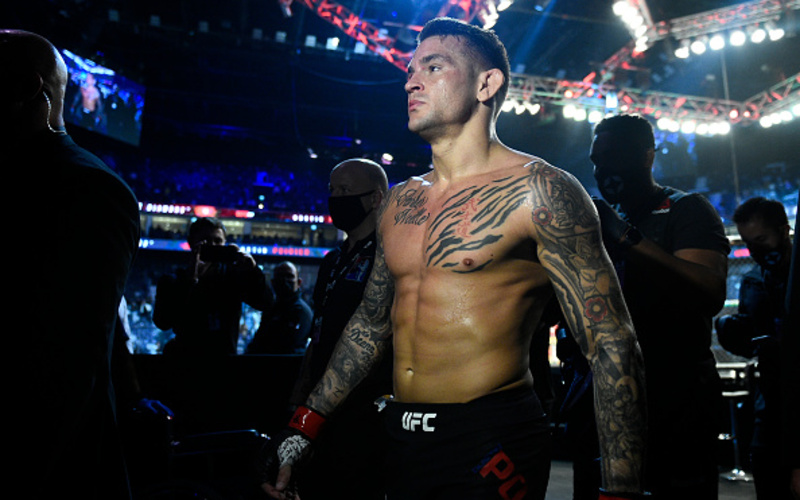 UFC 257 has come and gone with Michael Chandler (22-5) and Dustin Poirier (27-6-1) coming able to defy the odds and have impressive wins against tough competition. It seems that existing lightweight champion Khabib Nurmagomedov (29-0) has pretty much confirmed his retirement. So now it’s time to ask, after UFC 257, where does the UFC lightweight division go next?

While Chandler had an astonishing performance against Dan Hooker (20-10) and showed the world that he belonged with the elite at 155, it doesn’t seem quite right for him to jump straight into a title shot with one win in the UFC. Charles Oliveira (30-8-1) has an eight fight win streak and has beaten multiple top 10 opponents in the UFC lightweight division, so he is quite deserving of a title shot in comparison to Chandler. However, it would not be so bad to put Oliveria and Chandler in the octagon to decide who will fight Poirier next.

While “Du Bronx” is certainly deserving of a title shot, it wouldn’t be the first time that the UFC has passed someone over in favor of a fighter they deem more marketable. Another option is that Chandler fights former interim champion Justin Gaethje (22-3). Gaethje was the last man to fall short against Nurmagomedov and a fight with him would cement Chandler’s contender status.

Either way, it doesn’t seem right for Chandler to jump the queue by beating Dan Hooker who is 3-3 in his last six and doesn’t really have any wins against elite the competition of the UFC lightweight division. Chandler may have a difficult time against Gaethje or Oliveira. Gaethje is lethal on the feet and is a proven anti-wrestler with staying power that Chandler will not be able to keep up with.

Oliveira is a rangy grappler who may be able to snap Chandler down and strangle him. However, Chandler has proven he can shut anyone’s lights out in the early goings and this might just be enough for him to push past the elite of 155 and make it to Poirier for the belt.

What’s Next for Poirier

With Poirier’s TKO of Conor McGregor (22-5), he has established himself as the man who is next for the title fight, Regardless of what happens with Nurmagomedov, Poirier’s next fight should be for the belt no matter what. The only other fighter that seems to be deserving of that opportunity is the previously mentioned Oliveira.

However, Oliveira isn’t a slouch on the feet and Poirier is a skilled grappler in his own right, which means the fight will be competitive no matter what phase it is in. The winner of the fight would likely be whichever man is able to move forward and force the other on the backfoot. If Oliveira can get Poirier with his back against the cage and shoot, he’ll likely be able to control “the Diamond” on the ground.

However, if Poirier can get Oliveria to move backwards he will have a harder time landing takedowns which gives Poirier a greater chance of landing offense. Poirier has mentioned taking on Nate Diaz (21-12), and while that would probably do fantastic numbers, it does seem to be a waste of time for one of the divisional greats. However, if Poirier wants to get a pay-day then more power to him.

Poirier would likely use calf kicks to punish Diaz’s lead leg while also nailing him with counters when Diaz moves in to strike. The fight would be one-sided unless Diaz is able to get Poirier down, in which case he would likely have a decided advantage on the ground. Either way, it’s definitely not the fight to make especially considering that Diaz has fought twice since his loss to McGregor in 2016.

The Next Step After UFC 257