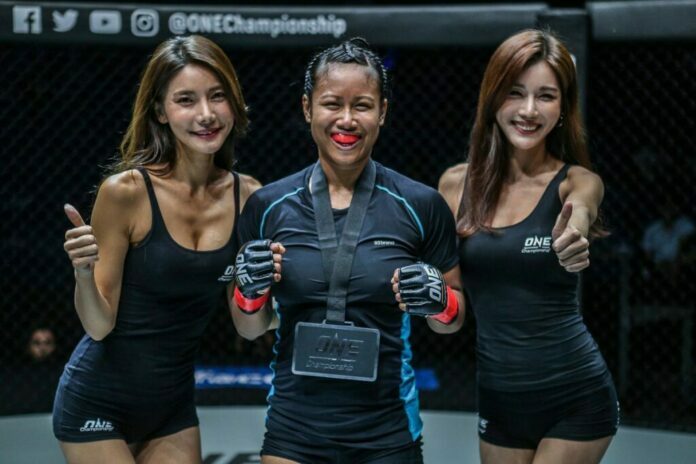 Sovannahry Em steps back inside the ONE Championship Circle on Friday, January 29, to take on South Korea’s Choi Jeong Yun at ONE: Unbreakable II, a previously recorded event.

However, her path back to active competition has been fueled by self-reflection.

Em was undefeated and on the rise when she last competed at ONE: Mark Of Greatness in December 2019, but she fell victim to a rear-naked choke in just 2:40 of action to Rayane Marques Bastos.

“Looking back, there were so many different little factors that went into it. I realize now that I had to deal with something I never dealt with before, which was dealing with the mental side of the fight game,” Em said.

“I felt like my training was good. I felt like I had all the skills needed to win that fight against Rayane, but I just wasn’t mentally prepared.”

“I think after my last loss, I just realized how new I am to this sport, just as far as my understanding of it and my appreciation for it. I just have so much to learn, so much catching up to do that I was kind of dealing with impostor syndrome for a little bit.”

Following the defeat, Em hired a sports psychologist to address the mental aspect of her game. And for all athletes, their mental toughness was put to the test in 2020 as the global pandemic changed how everyone trained and competed.

Em expressed, “I was feeling very down. I was like, maybe I’m not built for this after all. Especially with COVID and being in lockdown, I’ve had so much time to just really improve my game and really focus. I think it’s going to show in a big way in my upcoming fight with Choi [Jeong Yun].”

As part of the change in the training of “The Sweet Savage” during the pandemic, Em found more technical aspects of her game to address by watching instructionals and other film.

But when she could finally train again, the Cambodian-American got more one-on-one training with her coach to tackle the fine details.

The strain of COVID-19 on Sovannahry Em training

“You know, once we started understanding COVID a little better, we just made a promise to each other to keep our circles really tight. We just spent hours and hours at the gym,” detailed Em about her training.

“I mean we’d only meet two or three times a week, so during that period, we’d really make it count by having these four and five hour-long training sessions. Just having this one-on-one time with my coach, really nitpicking on the areas that I need to improve and making those adjustments, I think it’s helped with my confidence.”

Filled with confidence and a renewed spirit, Em takes on Yun in Singapore to try and get back in the win column for herself and Cambodia.

The Southern California resident understands the challenges of her opponent and plans to use her grappling to stifle the oncoming strikes.

Em said of the matchup, “She’s a kickboxing champion, and also on top of that, I’m coming in as a much shorter fighter. That’s something that’s always been kind of intimidating to me, but we’ve worked on dealing with someone who has a length advantage. Now I’m seeing it as just another aspect to deal with. She’s going to want to stand and trade and do her thing, so I’m going to do my best to not allow that.”

With an impressive performance at ONE: Unbreakable II, Em can put herself on track for a big 2021.

“I’ve had so much time to just catch up with my skills, and now I’m just excited to get in there and test those skills and see where I’m at and show it off to everybody.”