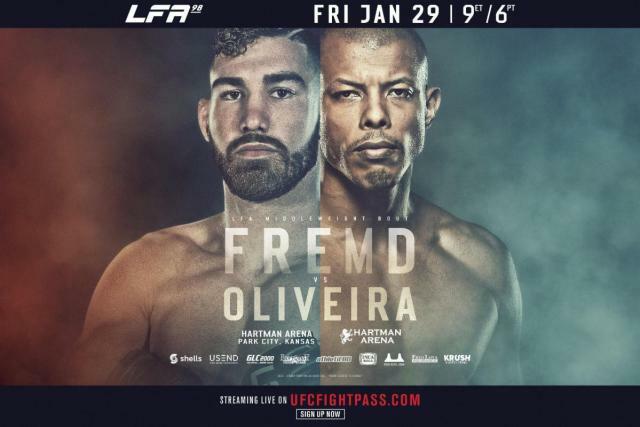 LFA is back Friday night with a great night of action at LFA 98. LFA always puts on exciting, fast-paced cards with plenty of stoppages and outstanding matchmaking. It’s separated itself as being the number one feeder of young talent to the UFC.

Middleweights will clash in the main event of the evening. The very talented Josh Fremd will take on Bruno Oliveira. Oliveira will be making his promotional debut, having fought his last fight in a losing effort at the Dana White Contender Series in November. He’s equally comfortable striking or on the mat and has a highly developed submission game.

Josh Fremd will put a four-fight winning streak on the line Friday night. His two fights were both in LFA and he won both fights in the first round via strikes. He is the betting favorite coming into this fight, but I expect it to be a very close fight that will likely not go the distance.

In the co-feature bout of the evening lightweights, JJ Okanovich will challenge Lucas Clay. Their combined record is a very impressive 13-2 and this should be another excellent fight between two talented fighters. JJ Okanovich has won six fights in a row and fought for Bellator before fighting in the Dana White Contender Series. He won that fight but was not offered a contract for his decisive victory.

Lucas Clay has fought for LFA in the past but bounced around some other events and now finds himself looking to climb the lightweight ladder. Whoever wins this contest could well find themself in a big fight in the coming months. The loser faces a steep climb back into the limelight.

MMA Sucka will have live results for LFA 98 as it happens Friday night. Want to catch up on past events? You can find results for their last event, LFA 97.

Josh Fremd, with a victory, will find himself in an LFA title fight or scooped up by the UFC. Both men are very talented and this could play out on either their feet or on the mat. Fremd is the better striker and has shown good takedown defense in the past. Going to with Josh Fremd via TKO in the late going.

LFA 98 has an excellent co-main event. This is a heck of a fight but in the end, JJ Okanovich has more paths to victory than Lucas Clay. Clay can keep this on interesting, however, and it certainly not a pushover in any capacity. When it comes down to it, JJ Okanovich wins the fight via Unanimous Decision. He’s just the better, more talented fighter.

On paper, this is a pretty sizeable mismatch. Richard Palencia is an undefeated prospect who looks ready to take the next step. He brings with him a perfect 7-0 record and will be facing Saudino, who has a definitive experience advantage but has lost five of his last six bouts. This seems very likely to make it six losses in seven fights.

Joshua DaSilveira is a perfect 3-0 on his young career but has looked very sharp. He’s won all three fights via stoppage with one TKO and two submissions. He looks the part, and at this point needs experience. He’ll be looking to stay perfect against Matt Paul, who is 3-2 in his last five and will be making his LFA debut. Joshua DaSilveira has a showcase fight here, and he will close the show in a dramatic fashion with a big knockout.

Zac Pauga and Ashby Thomas are both one fight into their careers, and both won their debut. However, Zac won his debut under the LFA umbrella and looked really solid in that victory. Ashby Thomas is making his LFA debut, and not a whole bunch is known about him. I can tell you Pauga is the biggest favorite on the card at -425 and for that reason, picking him seems to make the most sense. Going with Pauga to win.

Dakota Bush is 4-2 inside LFA and will be looking to further solidify himself with a victory Friday night. He’ll be facing off with Austin Clem, who is the owner of a three-fight winning streak and an overall record of 4-1. Seems that with the two fighters being somewhat even, it stands to reason that I’d take the fighter with the LFA track record. Bush is a more known quantity and for that reason, he should win the fight.

Remember the name, Tabatha Ricci, because people will be talking about her sooner rather than later. She’s a very talented fighter with outstanding grappling. She’s a perfect 3-0 but she has more experience if you count her Jiu-Jitsu experience. Vanessa Grimes has lost five consecutive fights and this looks like it’ll be number six. Ricci via submission, early. 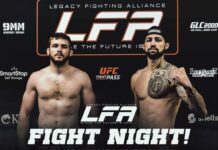