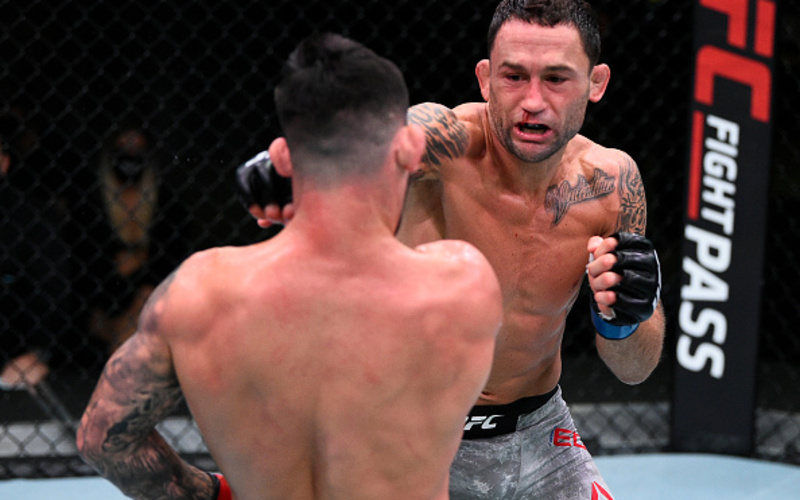 Frankie Edgar will be making his second appearance as a bantamweight at UFC Vegas 18 in the co-main event. He will take on top bantamweight prospect, Cory Sandhagen. In a fight that will likely determine who will be next in line for a number one contender fight. Champion, Petr Yan will be fighting Aljamain Sterling at UFC 259 on March 6th. Meaning the next time the title will be defended will likely be towards the end of the year.

Edger was successful in his bantamweight debut with a split decision victory over Pedro Munhoz. Edger has never been submitted in his career and only has two out of his eight losses via knockout. Edger has great cardio and has shown on many occasions that he will be just as fresh in the later rounds as he is when the fight first starts. He has also been known as a great wrestler. He was a division one wrestler in college and went to the state championships three times when he was in high school. He is also a first-degree black belt in Brazillian Jiujitsu under Ricardo Almedia.

Edger once won the lightweight title in 2010 by defeating Bj Penn.  He then defended that title three times before losing it to Benson Henderson. He was given an immediate rematch which he lost and then dropped down to featherweight. He then fought for the featherweight title three times losing all three times to Jose Aldo twice and then Max Holloway. Edger has made the drop to 135 to try and make another run and hold UFC gold once more at UFC Vegas 18.

Sandhagen is 6-1 in the UFC with his only loss coming by submission to Aljamain Sterling. He has wins over guys like Marlon Moraes, Raphael Assuncao, and John Lineker. He has finished eight of his 13 wins. Five by knockout and three by submission. He has never been knocked out in his professional career. Sandhagen currently holds a brown belt in Brazillian Jiujitsu under Eliot Marshall.