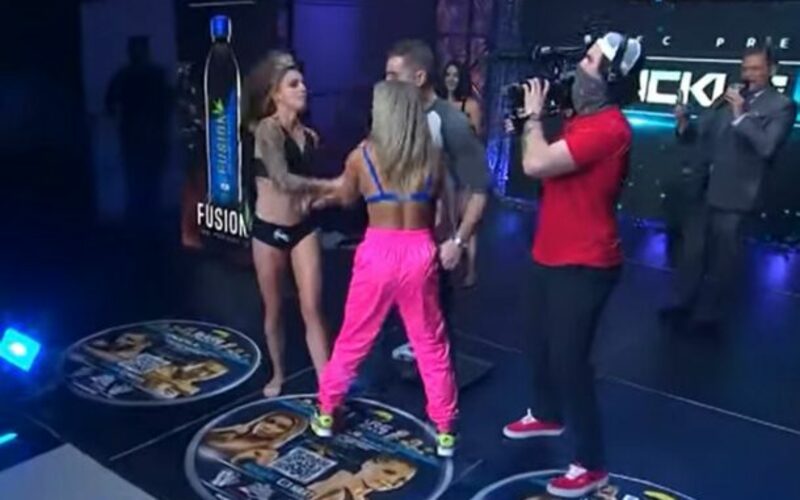 We have your BKFC KnuckleMania results live as they happen. BKFC KnuckleMania is live tonight and please, believe me, you don’t want to miss a second of the action. Bare Knuckle FC always delivers the violence and non-stop action and tonight is the best card they’ve ever put together.

In the main event, Paige VanZant will be making her debut with BKFC and the world can’t wait to see what she brings to the ring. She is an experienced fighter but this will be her first foray into the violent world of bare-knuckle boxing. No takedowns, no submissions, no gloves. It’s going to be bananas. Toeing the line across from her is a skilled boxer, Britain Hart. People have no idea what to expect, although VanZant has been training at American Top Team and that certainly bodes well for her.

In the co-main event, the bantamweight title will be on the line as Johnny Bedford will face off against Dat Nguyen in what could be a fight of the year candidate. Bedford is 5-0 since making his debut with Bare Knuckle and he has looked dominant during that run. He’s gritty, tough, and heavy-handed and should pose a serious threat to Nguyen, who might not pack as much power, but brings excellent skills to the ring. Nguyen is a former professional boxer who holds a 20-3 record. His footwork and skillset should make this one very interesting. You don’t want to miss this fight!

Chris Leben has been around the sport of MMA since before The Ultimate Fighter season 1. He became a household name due to that show and parlayed that into a successful UFC career. Rumor has it this will be his last fight, win, lose or draw. Leben has fought twice for BKFC going 1-1. He also won his Bare Knuckle debut for another promotion, defeating Phil Baroni. Tonight he’ll meet the ridiculously heavy-handed Quentin Henry in a fight that should look similar to a demolition derby. There will be a stoppage here, and it will be violent.

Recap: The round started out slowly with both fighters looking to establish their range. During a clinch, VanZant landed a series of uppercuts. Both fighters were active but I gave the advantage to VanZant.

In the second round, VanZant did a good job establishing the jab and landed a strong left hook. Hart was able to walk through it and landed some big shots in the clinch to the body. That was a very close round, and so far it’s been entertaining.

Best round of the fight for Hart as she landed the more damaging shots and looked to have Van Zant hurt. Both fighters are fighting good technical fights, and it’s super close on the scorecards. I have it either two rounds to one for Hart of maybe one apiece and one even.

Hart did well finding a home for her right hand in the fourth round. VanZant is starting to struggle to get inside and land as well as she did early on. This is a close fight could well be tied at two rounds apiece headed into the final frame.

A great final round between these two warriors. Hart did well early but then VanZant exploded and hurt Hart numerous times down the stretch. Non-stop action in the final minute of this fight, and Paige VanZant did enough to clearly win the fifth round, and likely win the fight in the process.

Recap: Bedford looked to crowd Nguyen on the inside and offset Nguyen’s technical advantage. Nguyen landed a couple of clean shots that hurt Bedford. Good first round with both fighters trying to press their advantage. Scored it 10-9 for Nguyen.

Great action to open the second round and both fighters landed solid shots. Nguyen was landing the bigger shots and Bedford was showing the damage. He’s was cut to the eye and began to swell. Bedford also landing, but Nguyen landed more and wobbled Bedford a couple of times. Two rounds to now for Nguyen.

Bedford landing more shots so far and he took a poke to the eye, the third time Nguyen fouled or attempted to foul Bedford. Much better round for Bedford, who likely won that round with the heavier damage.

Bedford did better when he leaned on Nguyen and put his weight on him. The fourth round was action-packed and both men landed their share of shots. That said, Bedford landed more and more damaging shots, putting the round in the bank. This fight could well be even headed into the final round.

Really fun firth round that saw a ton of back and forth action. It was rockem-sockem robots for the fifth round and it was close. I scored it for Bedford, and thus on my card he wins the fight 48-47.

Recap: This is it for Chris Leben, he’s retiring win, lose, or draw after this fight. Both men looked fired up and ready for war. Leben landed a big combination and Henry is hurt. He went down, claiming he was poked in the eye. It was a punch but he was still given time to recover. The fight was restarted and both men started landing big shots. Leben landed a double left hook and finishes Henry in the first round.

Recap: Zane and Brown came out and got after it pretty quickly. They got tied up in a clinch and Brown hurt his knee. They stopped the fight while they checked on his knee. The fight looks like it will continue. They get back to action and Zane was very aggressive. The round ends and it was a good round, but Brown was limping badly after the bell sounded.

A close second round until the end when Brown landed a combination that dropped Zane. Zane gets to his feet but tells the referee that he cannot see under his left eye. That’s all the referee needed to hear and the fight was stopped. TKO win for Brown.

Recap: Both fighters came out cautiously and worked to find their range. Hunt landed the first big punch of the fight, a right hand that thudded against Morrow’s face. Morrow threw a nice combination that ended with a crisp left hook. Close first round, both guys seem the most skilled combatants we’ve seen this evening.

Not much done by either fighter in the second round. Hunt has the better skill set, but neither man seemed to want to engage. At one point Hunt stood in front of Morrow with his hands down, Morrow still didn’t throw. Fans let the fighters know they wanted more action. Hunt won the round, but this fight isn’t one to write home about.

More of the same sadly to open the third round. Hunt goes down by the referee ruled it a slip. Looked to have perhaps been a knockdown. Hunt pushing forward and eats a few shots from Morrow. Not a good fight. Scored the third for Morrow.

This fight continued to look more like a sparring session in round 4. Hunt pressed the action a couple of times and landed a hellacious flurry at the end of the round. He hit Morrow with a number of big shots, including one when he was down and the referee called the fight. The left hand from Hunt was crushing!

Recap: The two came out and measured each other, but Chalbeck was more aggressive and stung Bono, then knocked him down with a right hand. Bono got up but he was badly hurt. Bono survived to see round 2.

Chalbeck throwing the shorter, tighter punches and scored. Bono threw a lot of long, looping right hands that didn’t find their mark. Chalbeck landed a couple of nice uppercuts and did enough to win the round.

Bono gets stung with a right hand and stumbled backward into a heap. Looks like he took that right hand right on the eye and didn’t want anymore at that point. He stayed down and the referee completed the ten count. Big debut for John Chalbeck.

Haim Gozali def. John McAllister via TKO (Strikes) at 1:08 of Round 2

Recap: Fast and furious action with both men slinging heavy shots. McAllister landed a big right hand that stunned Gozali. Fun first round with lots of haymakers. Scored it for McAllister.

McAllister does a good job and dipping under the punch and landing a counter right. Bam, just like that McAllister gets floored and is badly hurt. He recovers but is almost immediately knocked down again and the ref has seen enough and calls a stop to the action. Big comeback from Gozali!

Dillon Cleckler def. Chris Jensen via KO (Body Shot) at 0:44 of Round 1

Recap: This one didn’t take long. Cleckler came out and landed a straight left and followed it up with a right to the body and it folded Jensen up. He couldn’t beat the count and that was a FAST victory for Dillon Cleckler.

Recap: These two started slinging big shots at the opening bell. Starling cut on the left eye seconds into the fight. Starling lands a counter right and drops Sigala midway through the round and then poured it on. What an absolute slugfest! Great first round, score it for Starling because of the knockdown.

More back and forth in the second and once again Sigala finds herself knocked down by a crisp punch from Starling. Starling taking control, and Sigala is starting to fade a bit. We’re heading to the third round with Starling up two rounds to none.

Starling utilized her reach and landed single shots to Sigala who’s starting to really show the damage. She’s cut on both eyes and has a large hematoma on her forehead. Sigala is doing what she can to stay active and lands a couple of right hands that blow up Starling’s left eye. Starling puts another round in the bank.

More of the same in round 4, Starling is landing the more telling shots, and Sigala doesn’t seem to have an answer regarding how to get inside and do damage. Both women are a mess, bleeding and swollen. This has been a real slugfest. Sigala is going to need a finish to earn the victory in all likelihood.

Hell of a fight to kick off the show. Both ladies laid it all on the line and busted each other up in a major way. Starling did more and should win this fight by a wide margin on the scorecards. I scored it 50-45.

Travis Thompson def.Dave Morgan via TKO (Strikes) at 0:22 of Round 2

Jarod Grant def. Brandon Lambert via TKO (Punch) at 1:11 of Round 3