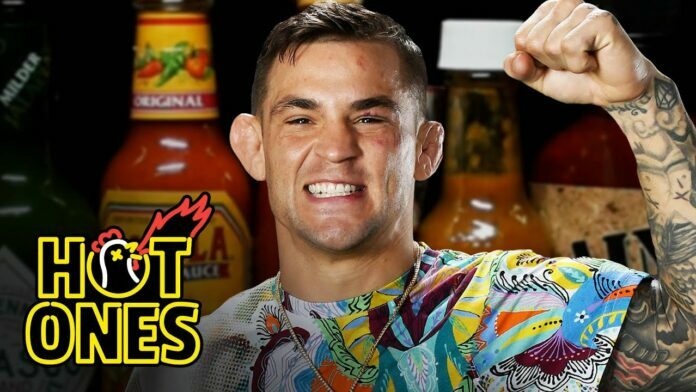 Dustin Poirier can handle the heat of a spicy chicken wing as good as he fights in the Octagon, that’s for damn sure.

After defeating Conor McGregor at UFC 257, Poirier recently appeared on the very popular YouTube web series “Hot Ones“. We learned a lot about the Louisiana native whilst he munched away on some extremely spicy chicken wings.

For those that are unfamiliar with the series — “Hot Ones” is a show where celebrities are invited to eat increasingly spicy chicken wings whilst being interviewed by the host Sean Evans.

12 Things We Learned About Dustin Poirier from Hot Ones

Let’s look at what we learned from Poirier on the show.

1. Dustin Poirier nearly got his leg cut open in the hospital!

“I went to the hospital, they wanted to cut me open to relieve the pressure inside of my leg.  It’s painful man, it’s bad stuff.”

Jim Miller kicked Poirier’s calf so badly during their fight at UFC 208 back in 2017 that when he went to the hospital, the doctors wanted to cut his leg open to relieve the pressure inside his leg. This shows how painful yet effective the calf kicks are in MMA. Poirier felt firsthand the power of the calf kick and has now implemented the technique into his toolbox of strikes. Just ask McGregor how well Poirier used them!

“I Don’t like leg stuff man. Heel hooks, knee bars, anything with the legs it just feels too funky for me.”

Seems like Poirier will not be joining John Danaher‘s death squad anytime soon, a BJJ team renowned for their specialty in leg lock submissions and in popularising the technique. “The Diamond” mentioned that he is not a fan of leg locks as it feels “too funky” for his liking. Whilst still uncommon in MMA, leg lock submissions have seen a bit of a renaissance in recent times.

We saw a terrifying yet terrific kneebar submission from “The Queen of Violence” Ariane Lipski against Luana Carolina at UFC Fight Night: Figueiredo vs. Benavidez 2 last year and can expect to see more in the coming future as more BJJ specialists enter the sport of MMA. Poirier does not like it though!

Poirier mentioned that whilst cutting weight for his fight against McGregor in Abu Dhabi, he was craving king cakes. According to Poirier, king cake is a Louisiana specialty eaten especially during Mardi Gras or start of the new year. Shaped like a large donut with usually cream cheese or chocolate inside the bread, Dustin Poirier loves his hometown and he loves his king cakes. Give the man his king cake! He’s earned it and deserves to be paid in full!

4. Dustin Poirier is quite the chef and loves a good gumbo meal

“I love a good gumbo man! I love making my own roux and sitting in front of a pot with a beer, stirring it and it’s gumbo season right now. It’s a little chilly outside and its perfect time for gumbo!”

It’s no secret that “El Diamante” is big into his cooking with his own brand of “Poirier’s Louisiana style hot sauce” out in shops. When asked what his signature meal would be, the Lafayette man stated gumbo! A true Louisiana man, gumbo is a soup popular in Louisiana consisting primarily of a strongly flavoured stock, meat or shellfish, a thickener, and the Cajun/Creole “holy trinity” ― celery, bell peppers, and onions. A Poirier gumbo cookbook would be just what the world needs right now!

5. Conor McGregor is the hardest puncher Poirier has fought

“Conor mcgregor is the heaviest handed guy that i’ve ever fought and i knew that going into this last one.”

Poirier’s resume speaks for itself. He has consistently fought the best of the best for what seems like an eternity ever since he made his WEC debut back in 2010. Some of those names include Khabib Nurmagomedov, Justin Gaethje, Eddie Alvarez, Anthony Pettis, Max Holloway and Conor McGregor who have all held a UFC belt at some point in their career. Poirier has beaten all those names except for lightweight GOAT Nurmagomedov.

Of all the elite fighters Poirier has fought, the Lafayette native reveals that the Pride of Ireland, Mr. McGregor was the heaviest hitter. The Irishman certainly packs a punch evidenced by his 22 MMA wins with 19 of those coming by knockout. Dustin Poirier showed that not only was he durable enough to take the shots McGregor landed, but he was able to dish out the punishment in that fight as he has shown throughout his career.

6. Korean Zombie (Chan Sung Jung) was the most complete fighter Poirier had fought

“At the time, I would say Korean zombie. When i fought him back , i think 2012 maybe. he was probably the most complete guy that i ran into up to that point.”

Early on in Poirier’s UFC career, the man racked up 4 consecutive wins in the featherweight division in 2012 and found himself in a title shot eliminator versus The Korean Zombie. Unfortunately “The Diamond” fell short as the Zombie won and went on to fight Jose Aldo for the featherweight title.

Like Poirier said, the Zombie was very complete in his fighting style. He had amazing jiu-jitsu skills on the ground (first and only one of two UFC fighters to perform a twister submission), solid takedowns, a granite chin and tenacious, powerful striking to this day. The Zombie still competes in the UFC as a top featherweight perennial contender.

“Everybody’s coming back to the locker room split open, stitches everywhere. Everybody’s busted open. these kids just aren’t at that level, and they’re allowing us to throw elbows.”

In Poirier’s own words, the man fought in “non-standard rules” during his amateur MMA days or the way I like to describe it, it was like the “wild, wild west” meaning it was rough and almost lawless. This may surprise many people as you would think amateur fighters would be protected to some extent to make it less dangerous compared to professional MMA.

In Poirier’s case, this was not the case. He described that when he fought back in rodeo arenas during his amateur days, elbows were permitted when they shouldn’t be and young, amateur fighters would come back to the locker room damaged and hurt. Or the commission would suddenly change the rules to make it 5-minute rounds instead of the usual 3-minute rounds for amateurs.

Sounds like some of these amateur MMA organisations were very sketchy about the rules and in general how they ran these events. Poirier mentioned one thing he does not miss about those days is having to chase down “shady promoters” for money owed to him or them not paying for medical bills for injuries. Sounds like some real slime balls in the industry.

“When i fought justin gaethje out in arizona, he partially tore my quad so i couldn’t really walk. getting on the flight,  i guess the elevation or whatever made my leg swell so much, i couldn’t bend my knee. my leg was just like a big link of sausage bro, I’m dragging it around i couldn’t move it. It’s shiny, its red. that hurt.”

Back in April 2018, Poirier engaged in an absolute war against Gaethje. It was a great back and forth fight but in the end, Poirier got the finish in the fourth round with a barrage of punches to get the KO victory. Although Gaethje lost, he left some pretty big red marks on the Lafayette man to remember as a result of some damaging leg kicks.

Gaethje is known to have some of the best leg kicks in the UFC roster and that certainly was not the exception in this fight. After the fight, Poirier described that his leg swelled up badly and that he could not move it properly.

10. Dustin Poirier gets anxiety thinking about a fight but absolutely loves it when it’s time to fight

“When i think about fights and stuff it gives me anxiety I’m like dude this is crazy but what i enjoy the most is walking through the fire and being put in that position. that’s where i feel comfortable.”

“the world slows down and nothing else matters but that moment and it’s a special time. its the realest thing you can do, hand-to-hand combat in the moment with someone trying to take you out. i love it”

Poirier admitted in the past that he hates the lead-up to UFC events as it gives him anxiety thinking about the fight. Constantly replaying the fight in his head, again and again, drives him nuts! However, you best believe he absolutely loves it when it is fight time in the heat of the moment. As he describes, he says “the world slows down” for him in there. For him fighting is the most real experience anyone can do and that is why he loves it.

There have been glimpses of evidence to suggest “El Diamante” really enjoys the madness during a fight and that’s where he feels most comfortable. We saw in his last fight against McGregor where he pointed at the Irishman during the fight a few times when he landed his nice check right hook, to let him know ” gotcha there!” That shows he is having fun in the octagon. Or when he gave Anthony Pettis a cheeky pat on his backside at the end of the first round after a furious exchange, you know then he is in his element and enjoying himself in the fight.

11. When it came to mind games, there was no one quite as crafty as McGregor in their first bout

“The first time i fought him, 100%. no doubt about it. the art of war was on full display. he might’ve beaten me before the fight started man.

Although Poirier exacted revenge against McGregor in their rematch this year with a crushing KO in the second round, their first bout back in 2014 was a very different story. Leading up to their first fight, McGregor’s trash talk, antics, mind games and aura were all too much for the young Lafayette man which slowly started to take a mental toll as the fight grew closer.

The fight started and ended within two minutes as Poirier lay on the floor KO’d by Mystic Mac in disbelief. Looking back in hindsight, Poirier mentioned McGregor may have already had him beat before the fight started as the mental games took their toll. Poirier clearly did not perform to the best of his abilities.

Before McGregor became Mr “nice guy” in his most recent bouts against Poirier the second time and Donald Cerrone, he was notorious for his mental warfare before the fight in making his opponents rage. This would make them not perform to their best, whether they were mad or felt the aura of McGregor, whatever it was the “Notorious One” lived rent-free inside their minds.

A great example of this was the 2015 title fight against then featherweight kingpin Jose Aldo in which McGregor tormented him for a year with some wild trash talk. Aldo was usually a very cautious striker but when he fought McGregor, the Brazilian lashed out aggressively in which he got countered and KO’d by the Irishman in just 13 seconds.

12. Poirier used to go bowling to unwind between fights

“The camaraderie of just a bunch of guys that work all week and can’t wait to be off work. finally go to the bowling alley get some beers down, knock some pins down and have some fun man.”

Back in the day, Poirier joined a bowling league in his native Louisiana to unwind between fights. Fighting can be a stressful business and requires a lot of sacrifices so it is important to relax and unwind between fights. Poirier’s way of unwinding was bowling and the man was not bad at it either. He claims he had a bowling average score of 165 points, certainly a lot better than what I can do!