Stephen Thompson recently put his name in the proverbial hat to face Kamaru Usman for the welterweight UFC title. It wouldn’t be the first title match that Thompson had participated in either, having previously lost to Tyron Woodley in 2017. More recently, ‘Wonderboy’ is on a two-match win streak and is currently ranked 5th in the division.

On the other hand, Usman is on a ridiculous 17 fight win streak and is unbeaten in the UFC. Sitting at the top of the tree, it seems that for now at least, Usman is in the form of his life. However, this doesn’t phase Wonderboy who recently staked his claim for a match against Usman, and it kind of makes sense.

The Case for Stephen Thompson

According to the South Carolina native, he deserves a shot because he’s the only fighter in the top 5 who is yet to face Usman. He took to Twitter to state “Well seeing as how I’m the only guy in the top 5 that Usman hasn’t fought yet….I guess I’m next…makes sense right? Great performance Usman.” With this logic, it’s hard to disagree with Thompson who is known as something of a fan favorite, with his last fight earning him the performance of the night bonus.

As the saying goes, styles make fights, and this seems to square up nicely. On the one hand, Usman is a decorated grappler with a background in wrestling in BJJ. On the other, Wonderboy is known for his kickboxing and karate. Whilst Usman has successfully defeated various striking-based opponents in the past, arguably Thompson offers something a little different.

Can Stephen Thompson Land the Fight?

This leads on to the next question, could this fight actually happen? Well, going against the proposal from Wonderboy, there is the small issue that there are currently 4 fighters ranked above him. Whilst this has never stopped similar fights happen in the past, there is also a strong case for Colby Covington or Jorge Masvidal to face Usman before Thompson. This is because they’re both higher in the rankings and also due to the fact they took the Champion into the 5th round which is no easy feat.

Another problem for Wonderboy is that his time may be running out. Having just turned 38 years old, he is not exactly young anymore. Further, if he was to lose at some point then this would probably spell the end for his dreams of a UFC title. It’s a shame as he seems to genuinely be one of the UFC’s good guys, but the reality is that most fighters rarely win titles as they edge towards age 40.

Returning back towards the fighters above him, there’s also talk of Jorge Masvidal apparently close to a rematch with ‘The Nigerian Nightmare‘. Undoubtedly, the career of Masvidal has taken off since he beat Darren Till back in 2019. Since then, he’s put on some exciting displays of his own and has become a fan favorite. Not only this but The Cuban is in good form, with his only loss in four coming to Usman. Ironically, however, Thompson has faced Masvidal before and won via unanimous decision.

So, the question remains as to whether this fight will actually happen or not? Thankfully for Thompson, Usman is a fairly active fighter and usually gets in 2-3 fights per calendar year. In theory, this could mean that he could face Masvidal at some point this year. If he was to win, then Thompson may well get his wish if other things fall into place. This may also require Thompson to fight someone else during this period to keep him active and in contention for a fight.

With this said, there’s a possibility that this one may actually happen. However, don’t hold your breath and if it does happen, it may be towards the end of the year with a few twists and turns in between then. One thing is for sure however, it would make for a very interesting fight where karate fans are concerned and Stephen Thompson’s unusual style may just be enough to trouble Usman. 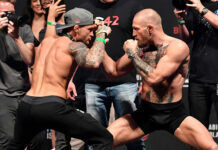