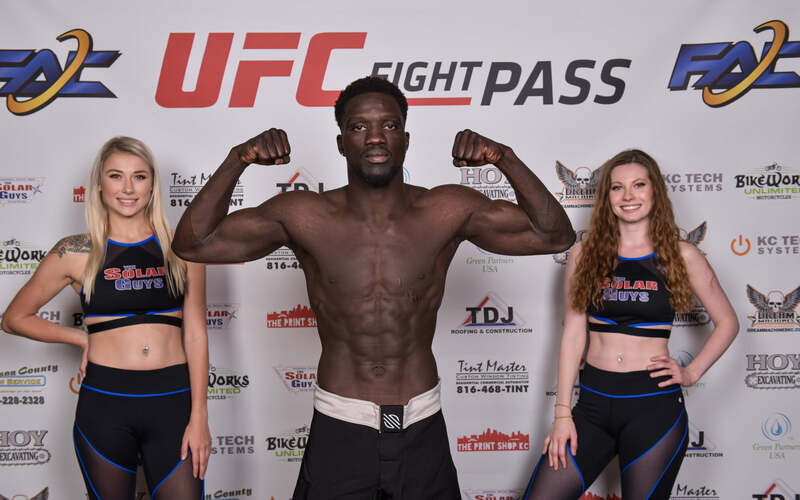 David Onama, a 6-0 featherweight prospect, will look to keep his undefeated record intact. The Glory MMA & Fitness product is slated to take on Mike Plazola in a 150-lb. catchweight contest at FAC 7 on Friday, March 5.

Onama said Plazola is an aggressive and powerful striker with really good Jiu-Jitsu.

“My game plan is to close the distance on him and not let him get too close to me,” Onama told MMASucka.

Onama, who captured the KC Fighting Alliance amateur featherweight title in his last amateur bout in February 2018, said he would love to fight for a title with Fighting Alliance Championship following a win over Plazola if the opportunity arises.

“I’m always here to fight,” he said. “I make weight, I show up, I fight and perform well. Whatever opportunity they’ve got for me, I’m going to take it and see where it goes from there.”

Onama joined Glory MMA & Fitness in 2014 following his graduation from high school. Before his first amateur fight, he was training under James Krause, a current UFC welterweight who has been making a splash as a coach and cornerman.

“It feels amazing training under James Krause,” Onama said. “Day one, he took me in and got me to where I need to be today. Without him, I don’t know where I would be, honestly. We all get better under James Krause. He’s probably one of the best coaches I’ve trained with in my whole life. I love the gym, man. Everybody’s family there. Brothers and sisters.”

Onama says, under Krause, he has developed a calm approach to his fights while still giving fans what they want to see. He has finished five of his six professional victories as a result.

The prospect said he’s more of a striker, but he’s worked on his wrestling and grappling.

Onama said he’s aiming to reach the UFC as opposed to any other major organization.

“That’s why I started fighting. All I wanted to do was be in the UFC. Growing up, all I did was watch UFC.”

His timetable on reaching the Octagon? Sooner than you might think.

“By the end of 2021, I will be in the UFC for sure. All my hard work I’ve been putting in, it’s definitely gonna pay off pretty soon.”

Onama said he would be up to competing for a FAC title, but he also believes he’ll be ready for the UFC after he “beats up Mike Plazola.”

“There are some guys I could for sure beat up in the UFC right now,” he said. “As soon as I beat Mike Plazola, I’ll be ready for the UFC for sure.”

Onama is calling a second-round TKO or knockout finish of Plazola.

FAC 7 is slated to go down March 5 from the Cable Dahmer Arena in Kansas City, Missouri. The event will be main evented by Trey Ogden and Darius Estell, who are clashing at lightweight. David Onama and Mike Plazola are penciled in as the co-main event, according to Tapology.