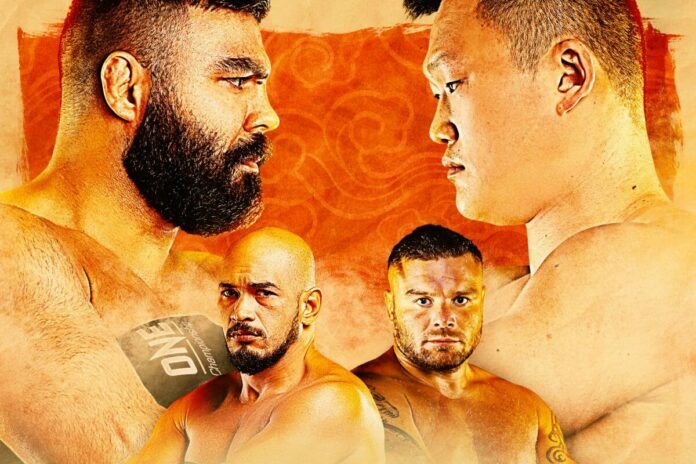 ONE: Fists Of Fury II, a previously recorded event from Singapore, will air on Friday, March 5, as part of ONE Championship’s 2021 campaign.

Kang is coming off a come-from-behind victory over Megdi Barghi at ONE: Unbreakable III. The undefeated South Korean has a perfect 100% finishing rate to his credit heading into the biggest match of his career.

For Aliakbari, the highly-touted grappler has already set forth a plan to make waves in the ONE heavyweight division by calling out ONE Heavyweight World Champion Brandon “The Truth” Vera. A dominant performance against Kang would immediately make him one of the division’s top threats.

However, these two are not the only heavyweights tangling in Singapore. The co-main event is another matchup of prospective heavyweights wanting to make their case to be a top contender.

Alexandre “Bebezao” Machado will welcome Anatoly Malykhin to ONE’s heavyweight ranks in the hopes of nabbing a finish. But the Russian will be looking to do the same to extend his impressive 100% finishing rate onto the global stage.

The contendership bouts continue in the featherweight division.

Ryogo Takahashi will try to back it back-to-back victories inside the ONE Circle against the streaking Tang Kai. Takahashi will be looking to break into the top five of the division and get a rematch with current ONE Featherweight World Champion, Thanh Le, while Kang tries to add his seventh consecutive victory to his record.

Yoshiki Nakahara and Ruslan Emilbek Uulu will tussle in a featherweight affair as well. The action-packed matchup will keep fans entertained with a break-neck pace.

Opening the card will be bantamweight action. The ever-tough Mark Fairtex Abelardo meets American Emilio Urrutia in a sleeper for Match of the Night.

There will also be a ONE Super Series bout featured on the card as Han Zi Hao meets Adam Noi in bantamweight Muay Thai action.

That is our ONE: Fists of Fury II preview.