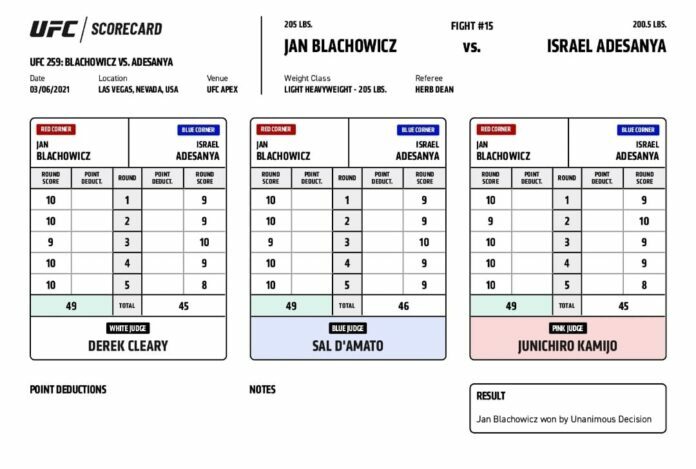 Jan Blachowicz and Israel Adesanya battled for five rounds in the main event at UFC 259 for the light heavyweight championship. Israel Adesanya losing out on his chance to become an esteemed UFC double-champion, as the Polish-born champion Jan Blachowicz used a mix of wrestling and strong strikes to defend his UFC title. Fighting the full five rounds we turn to the judges scorecard for a decision.

Judge Sal D’Amato scored only a single round for the challenger, Nigerian-born, Israel Adesanya, and the other four scored for the champion Jan Blachowicz, the total being 49-46.

Similarly, Judge Derek Cleary scored a single round 3 for Adesanya, and all four other rounds were scored for Blachowicz. However, Cleary judged the final round a 10-8 in favor of Blachowicz, the total becoming 49-45.

The third judge, Junichiro Kamijo, dissented with the other two judges and score round 3 for Jan Blachowicz but instead gave round 2 for Adesanya, and all others to Blachowicz. Judge Kamijo also scored the final round a 10-8 in favor of Blachowicz.

Round 5, two judges gave a 10-8 in favor of Blachowicz in which he out-landed the challenger Adesanya 28 to 12. But the real story of round 5 is Blachowicz’s singular takedown in which he was able to maintain control, able land ground and pound, for 50% of the entire round. Adesanya on the bottom was unable to get out.

According to the unified rules of MMA a 10-8 round is used for, “One fighter wins the round by a large margin…10 – 8 does not require a fighter to dominate their opponent for 5 minutes of a round…one fighter has dominated the action of the round, had duration of the domination and also impacted their opponent with either effective strikes or effective grappling maneuvers.” 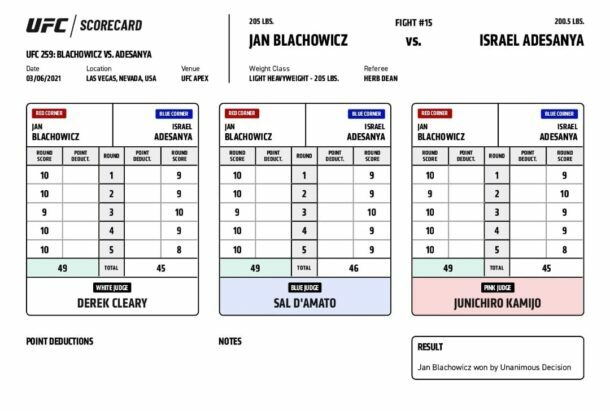 UFC 259 was a memorable night of 15 fights taking place at the UFC Apex. Its main event saw two champions battle for five rounds which concluded with a memorable set of scorecards from the three judges, split dissenting rounds and 10-8’s. Blachowicz keeps his light heavyweight title defending against the middleweight champion Adesanya.

What are your thoughts on the UFC 259 main event scorecards?

Amanda Nunes def. Megan Anderson for the UFC Women’s Featherweight Championship via submission (inverted triangle armbar) at 2:03 of round 1

Aljamain Sterling def. Petr Yan for the UFC Bantamweight Championship via DQ (Illegal Knee) at 4:29 of round 4

Islam Makhachev def. Drew Dober via submission (arm triangle choke) at 1:37 of round 3

Kai Kara-France def. Rogério Bontorin via TKO (right uppercut and right hook) at 4:55 of round 1

Kennedy Nzechukwu def. Carlos Ulberg via TKO (right hook and ground-and-pound) at 3:19 of round 2

Sean Brady def. Jake Matthews via submission (arm triangle choke) at 3:28 of round 3

Trevin Jones def. Mario Bautista via TKO (right uppercut and ground-and-pound) at 0:40 of round 2