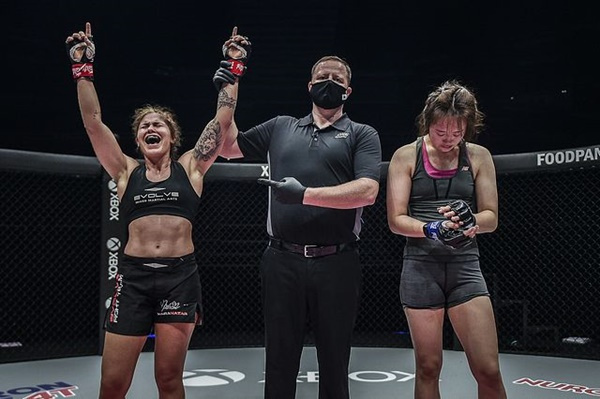 Brazil’s Maira Mazar steps back inside the ONE Championship Circle on Friday, March 19 at ONE: Fists Of Fury III, a previously recorded event from the Singapore Indoor Stadium against Jenelyn Olsim.

Maira Mazar Looks for Round 2 KO at ONE: Fists of Fury III

The strawweight battle pits Olsim against the #5-ranked contender within the division as they jockey for position beneath “The Panda” Xiong Jing Nan.

The matchup is a classic grappler vs. striker battle, but the Brazilian has been sharpening her tools and is looking forward to the challenge.

“[We’ve been] training a lot of kickboxing and boxing, so I prefer to fight a striker because I can show more of my game,” Mazar told ONE.

“But I don’t want to give her the same chance. I have to be more aggressive with her because she’s good when she has space.”

“I can use my counter game better than her because she’s a little bit shorter than me. I like to counter, but when a girl is tall, it’s harder to counter,” the Brazilian says.

Although Maira Mazar wants to show-off her developing striking game against the Filipina, she also welcomes in taking the contest to the floor, where she should have a decided advantage over her opponent.

“If it goes to the floor, that’s okay too. But we’ll have to feel how the fight is going to decide this.”

The #5-ranked contender is cognizant that she is currently in her prime, and that window is a short one for all athletes. Father Time looms for the Brazilian athlete, but she plans to take advantage of the moment in Singapore.

“I’ve been doing this all my life before coming to ONE Championship and to Evolve. I didn’t have many good opportunities in Brazil. Now is the time to [live] my dream, and show the world and show people that big dreams can become real if we work hard and if we keep believing.

Although the gold is an enticing goal for Maira Mazar, she continues onward due to her competitive nature.

“Of course, the belt is really beautiful. I want this belt. But this is not the point,” the Brazilian says.

“The most important thing is to prove to myself, my family, and the people that work hard with me – because many people have helped me here in Singapore – that we can do this.”

When she steps inside the Circle, Mazar expects to stop Olsim before the judges can render a decision.

“I would like to score a knockout or a ground-and-pound [TKO] on the floor in the second round,” she adds.