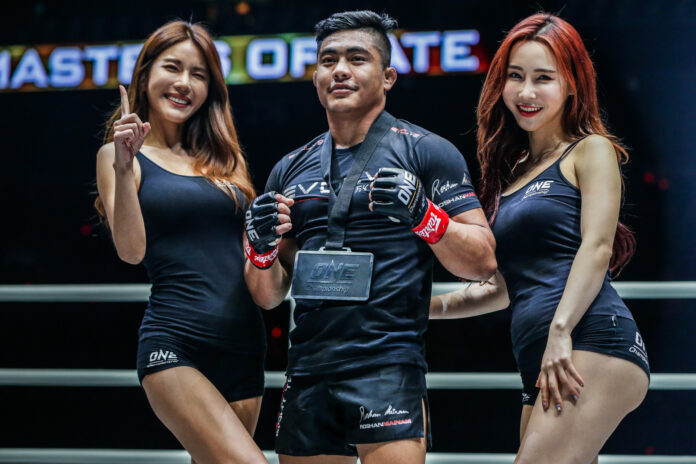 Roshan Mainam will meet Aziz Calim in a flyweight contest at ONE: Fists Of Fury III, a previously recorded event from Singapore, and the Indian martial artist is hoping to make it three-straight victories.

The Evolve MMA-trained athlete has posted back-to-back submissions, but Mainam, in an interview with ONE Championship, suggested he will be looking to test out his striking against Calim. He feels his training at Evolve has elevated his game to the next level.

Mainam says, “Going forward, I am looking to use my striking more in my matches.”

“I would like to make my country proud this year. I am training with world-class fighters here [at Evolve], and the level of training here is quite different and a notch above the rest.”

“I have trained hard and tried to take myself to the next level. I have improved in my last two matches, and I would like to continue doing the same this year, too.”

The Indian sees an opportunity against Calim. A third-straight finish inside the ONE Circle could move Roshan Mainam into a much bigger match in the evolving flyweight division later in 2021.

“I am really excited for this match because I got this fight at the beginning of the year. I have been working hard since my last match, and I am ready for this challenge. I am geared up for a good performance,” Mainam says.

“Calim debuted in ONE Championship before me. He has represented his country in many fights before this. He is a tough opponent with lots of experience. I will try my best to give a great performance.”

But Mainam does not see an easy night at the office coming his way. The Evolve MMA representative recognizes the talent of his counterpart but notes his expected advantage on the canvas.

“He has a good understanding of both striking and ground game. He has showcased good clinching, grappling, and ground skills in his matches. He is a well-rounded opponent,” Mainam says.

“[But] he has lost some of his matches by submission. I will try my best to finish him by either submission or striking.”

Although Mainam wants to test his striking, he won’t turn down the submission. And he will be looking for any opportunity to put an end to the action.

Mainam concluded, “I will try to finish the match as soon as possible. I would like to finish it in the first round.”