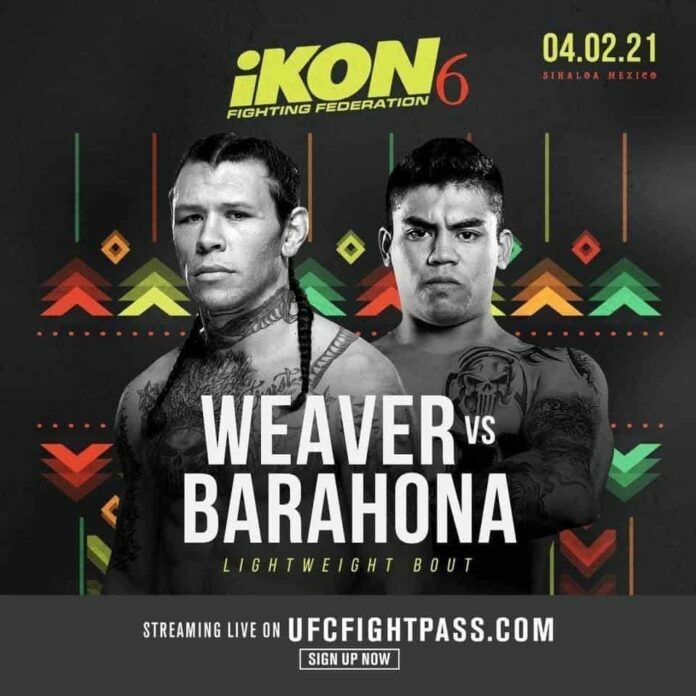 iKON 6 is set to take place this Friday, April 2nd in beautiful, Los Mochis Sinaloa, Mexico. The card can be watched exclusively on UFC Fight Pass. iKON 6 will start around 10 pm ET and will have a total of seven fights on the card.

The main event of iKON 6 is going to be Brok Weaver taking on Alexander Barahona. This will be Weaver’s first fight since being let go from the UFC. He went 1-2 in the UFC being submitted in both of his losses. Weaver holds a professional record of 15-6. Prior to joining the UFC, Weaver had a long career in the Florida promotion, Island Fights. In his time with Island Fights, Weaver racked up an 11-2 record. It is also worth noting that before he got into the UFC he had not lost a fight since his knockout loss against Martin Brown in 2016. Weaver has professional wins over guys like Rodrigo Vargas, Devin Smith, Tyler Hill, and Charles Felony Bennett.

His opponent, Alexander Barahona come into this fight with an 11-4 professional MMA record. Barahona is 5-1 since 2018 with his only loss being his last fight where he was knocked out by Daniel Zellhuber in his iKON debut. Barahona has spent most of his career in local promotions in his native country of Mexico.

In the co-main event former PFL star, Chris Curtis will be taking on Juan Grano Medina. Chris “The Action Man” Curtis is coming into this fight on a two-fight winning streak. He defeated Kyle Stewart by TKO and Darren Smith Jr. by doctor stoppage. He holds a professional MMA record of 23-8. Prior to that was his run in the PFL where he did great during the season and lost to Magomed Magomedkerimov in the semi-finals. He then replaced Magomedkerimov in the finals and lost to PFL champion, Ray Cooper.

Before his PFL days, Curtis spent most of his time in local promotions but he did get a shot on Dana White’s Contender Series in 2018. He made the most of his opportunity by knocking out Sean Lally in the third round although he was not awarded a UFC contract at the end of the night.

His opponent, Juan Grano Medina has a professional record of 7-5-1. Grano is a local fighter out of Mexico that is 0-1 in the iKON cage. His one loss was a TKO loss to Jonny Parsons. Jonny Parsons is the Muay Thai coach at Syndicate MMA where Chris Curtis trains. Grano will hold a slight size advantage over Curtis though.

The Rest Of iKON 6

iKON 6 will also showcase rising stars such as Isis Verbeek, Pete Rodriguez, and Elvin Espinoza. Along with a handful of professional newcomers such as Dana Yasiri Garcia, Andrea Vazquez, and Teresita De Jesus Lopez. iKON 6 also features eight Mexican-born fighters on the card.