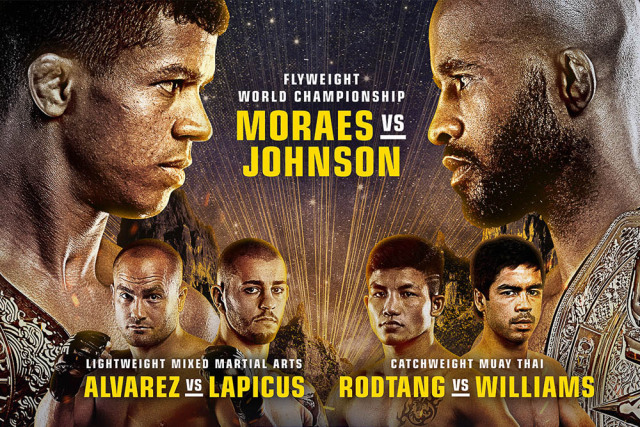 ONE Championship is set for a monstrous April, and it all begins on Wednesday, April 7, with ONE on TNT I.

Bouts to Watch at ONE TNT I

The U.S. primetime debut for ONE is not just exciting for fans because of their arrival on TNT but because they are bringing the heat.

What bouts do you need to make sure you don’t miss on Wednesday? Let’s take a look at the three matches you absolutely can’t miss at ONE on TNT I.

It almost goes without saying, but the ONE Flyweight World Championship battle is a can’t-miss event.

Not only is it a World Championship match, but it is a matchup that will draw out the very best of both men. Can Johnson claim another World Championship? Will Moraes announce his presence on the biggest stage possible and shine in primetime?

The answers to those questions will be the result of a compelling flyweight battle that requires both men to be thoughtful and creative inside the ONE Circle. There is no margin for error.

Mid-week mixed martial arts is rare, and to get a true elite World Title matchup is even rarer. Fans cannot miss this incredible meeting in ONE’s U.S. primetime debut.

It almost feels like cheating picking the other primetime mixed martial arts contest, but it had to be done.

Yes, there are high stakes on the line between the two lightweight contenders. Iuri Lapicus is ranked as the #2 lightweight contender, and Eddie “The Underground King” Alvarez can claim a title bid of his own with a win. But the reason fans should watch this is not the possibility of it being a title eliminator.

No. Fans should watch Alvarez vs. Lapicus because it could very well be the Match of the Year.

These are two aggressive athletes who throw down as soon as the bell rings. While fireworks are guaranteed, the level that these two warriors operate at means fans will be treated to something special beyond just a high-paced battle.

This lightweight battle will be all-action and could not only steal the show but the year.

On the lead card, welterweights Tyler McGuire and Raimond Magomedaliev will step inside the Circle with a possible title shot on the line.

Magomedaliev is coming off a big knockout performance in his last outing, while McGuire is coming off a decision win. As they both look for another big win, the stage will pressure them to try and make a statement.

The Russian is well-rounded with a sambo background, but that will not deter the American from utilizing his grappling. The matchup will be a clash of wills to see who can impose their game on their opponent.

This could be the sleeper pick for Match of the Night at ONE on TNT I.

What bouts are you looking forward to at ONE on TNT I?