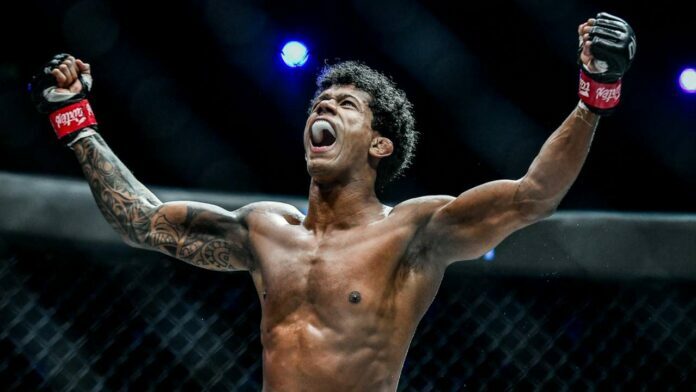 On Wednesday, April 7, ONE on TNT I premiered from the Singapore Indoor Stadium for ONE Championship’s U.S. primetime debut.

3 Things We Learned at ONE on TNT I

Adriano “Mikinho” Moraes successfully defended the ONE Flyweight World Championship against Demetrious “Mighty Mouse” Johnson in the main event to shock the world. The American Top Team star scored a second-round knockout and put an end to Johnson’s unbeaten streak in ONE.

After the first of four stacked events concluded, we all got a little better picture of what went down.

Here are three things we learned from ONE on TNT I.

Adriano Moraes Is For Real

The ONE Flyweight World Champion was able to do the unthinkable in his title defense at ONE on TNT I. Moraes finished “Mighty Mouse” by knockout.

Moraes’ skills were known within the mixed martial arts community. Still, the second-round finish of Johnson was a confirmation of those skills to the casual fan who was tuning in to see the American go for another World Title. Instead, they saw the Brazilian shine and deliver a memorable performance.

The victory was also confirmation that talent comes from everywhere. There are no borders or limits to where elite athletes come from. They are not isolated to any one spot.

Moraes is, without debate, one of the best in the world. If he weren’t, he would not have been able to do what nobody else has ever done against Johnson. He deserves the praise and respect that has been lacking throughout his career.

“Reug Reug” Oumar Kane is known for his hulking presence and his viral Senegalese wrestling clips. Now, he should be known as a developing heavyweight martial artist.

On 24 hours’ notice, Kane got a new opponent in kickboxing standout Patrick “The Big Swiss” Schmid at ONE on TNT I. In the grappler vs. striker matchup, Kane was able to display his improving stand-up by overwhelming Schmid early in the first round.

If “Reug Reug” continues to improve at this rate, he will be a problem for any heavyweight in the world. The performance was exciting but also notable with his skills. He is not simply a grappler. He is a mixed martial artist.

There may not be a more exciting heavyweight to watch grow in the sport than “Reug Reug”.

Raimond Magomedaliev Is Next-Up At Welterweight

Magomedaliev showed an all-around game against the tough American. Defensively he was on point. He avoided getting hit with big strikes, and in the grappling exchanges, he displayed incredible balance while out-working McGuire inside the clinch. When the match did go to the mat, Magomedaliev was able to reverse position on multiple occasions.

Offensively, the Dagestani touched up McGuire from varying angles and built his lead in each round at ONE on TNT I.

If Kiamrian “Brazen” Abbasov was watching, he likely saw his next contender pick up a key victory. It was a solid, all-around performance worthy of a title shot. We’ll see if Magomedaliev gets the call, but he proved he is worthy.