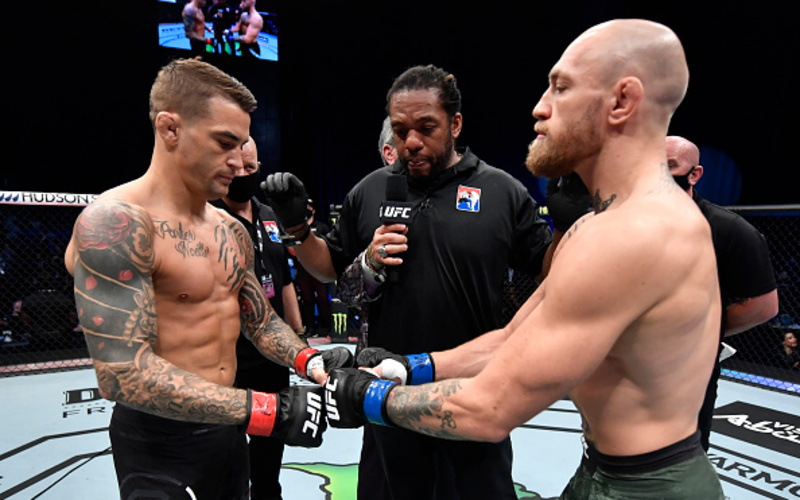 The bouts agreements have been signed and the trilogy is official, Dustin Poirier vs Conor McGregor 3 will be happening July 10, 2021 at UFC 264 in Las Vegas! The two fighters have agreed to meet for a third time following their blockbuster UFC 257 fight, officially announced by the UFC.

The UFC has made an official announcement on Twitter confirming Dustin Poirier vs Conor McGregor 3 as a five round main event for UFC 264 happening on July 10, 2021 at the T-Mobile Arena in Las Vegas Nevada. UFC President Dana White made an announcement on UFC.com confirming fans will be present at this event.

This agreement had been in discussion and was planned for some time, however, we were waiting on official bout agreements. Now, this story was originally reported by ESPN‘s Ariel Helwani, the bout has been made official. Conor McGregor had “agreed to the fight weeks ago,” and now Poirier has officially signed this contract. Helwani adds, “The trilogy…is expected to be one of the most lucrative in UFC history.”

While Dustin Poirier vs Conor McGregor 3 will not be for the lightweight championship McGregor has proposed creating his own belt for the occasion. “I ask the UFC to please create The McGregor Belt. I suggest rose gold and rubies.” The Irish-born fighter tweeted on March 31 and added, “Or yellow gold and emeralds possibly. Might be nice also. I’m open to design suggestions. Let’s link up, @UFC #TheMcGregorBelt.”

The first fight between the two was won impressively by McGregor at UFC 178 in 2014, winning the fight via first-round TKO. The second bout took place with the two headlining record-breaking UFC 257 in Abu Dhabi, UAE. This time around Poirier won his revenge via TKO in round two.

Recently the two began trash-talking each other on Twitter. “That’s a fun prediction!” Poirier tweeted. “You also predicted a donation to my foundation and you and your team stopped responding after the fight in January. See you soon.” Poirier said. “A donation, not a debt,” McGregor replied. “We’ve been awaiting the plans for the money that never came. I do with all my donations. Know where it’s going dot for dot. Otherwise it goes walking. As is the case with a lot of these foundations, sadly. You took the McG over the belt shows I was right.” Read the full story and timeline.

In the second fight, Poirier utilized calf-kicks to chop down the Mendoza-style stance of McGregor. The Irishman was preparing for a boxing match against legendary Filipino boxer Manny Pacquiao. And his coach, John Kavanagh, says this likely is why McGregor lost the fight. Coach Kavanagh says, “We got a bit obsessed with the boxing one. There was talk of a big boxing fight after that. Our bad, our mistake, our fault – no one to blame. We just have to make sure we have to keep spinning that kickboxing plate and all the other aspects of MMA and get ready for the rematch.”

But before Dustin Poirier vs Conor McGregor 3, Charles Oliveira and Michael Chandler have been booked to fight for the coveted, and vacant, UFC lightweight championship. Oliveira vs Chandler will be headlining UFC 262 upcoming on May 15, 2021. Poirier called the Oliveira vs Chandler fight, “Fool’s gold.” The lightweight title currently is vacant since the previous champion Khabib Nurmagomedov retired, at 29-0, and relinquished the title following his UFC 254 victory.

UFC 264 headlined by Dustin Poirier vs Conor McGregor 3 will undoubtedly one of the UFC‘s biggest fights. Both men are popular names and top-ranked fighters, with McGregor being MMA’s biggest name in its history. Both fighters are looking to settle the score for their legacy and pride. Can McGregor make the needed adjustment to overcome the calf kicks of Poirier, and will Poirier need to adjust to a new game-plan? Stay tuned to MMASucka for the updates and news for the trilogy at UFC 264.