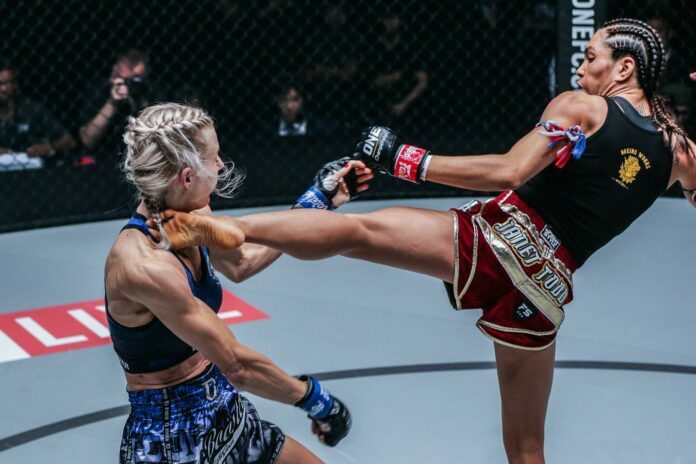 ONE Championship is back in primetime tonight, Wednesday, April 14, with ONE on TNT II.

ONE on TNT II: What to Watch

And the ONE Lightweight World Championship will be on the line in the headlining slot. Christian “The Warrior” Lee meets Timofey Nastyukhin in a can’t-miss battle of finishers. Also in action, Janet “JT” Todd takes on Anne “Ninja” Line Hogstad in a ONE Super Series Muay Thai clash.

Before the bright lights shine down and the bell rings in the action, here are three things to keep an eye on tonight.

Who Sets The Tone at ONE on TNT II?

The ONE Lightweight World Championship match features two finishers in Lee and Nastyukhin. However, this particular contest may come down to who not only imposes their will on the other but who can control the pace.

Lee’s last outing was fast and furious, and it wasn’t until he was stung by Iuri Lapicus that he settled into the action and took over. Nastyukhin’s power and aggression could give Lee troubles early on if he cannot set the tone early.

Controlling the action in a championship bout is essential. The action is scheduled for five rounds, and the emotions run high.

Nastyukhin wants to shock the world, and Lee wants to drag him into the deep waters. Who can implement their gameplan at ONE on TNT II? That’s the $64,000 question, and whoever can set their pace to allow them to work within that framework may be the one who gets their hand raised.

There may not be a more cerebral athlete on the ONE roster than Todd. The American aerospace engineer puts her mind to work in each of her bouts.

In her recent outing against Alma Juniku after a razor-thin first round, Todd made the adjustments and took over the action. She even dropped the Aussie in the second round with her powerful punches.

Watching “JT” work, read her opponent, and adjust on the fly is a thing of beauty. Hogstad is a big challenge, but that will only bring out the best in Todd’s ability to assess and adjust in the bout.

This atomweight Muay Thai contender’s contest will give fans insight into the exciting ONE Super Series action and be a tape study on how elite athletes use their “Fight IQ” inside the framework of a match.

The focus is on the top of the card, but the prelims should not be forgotten.

Three outstanding mixed martial arts contests will get the action underway at ONE on TNT II.

Bantamweights Mitchell Chamale and Shuya Kamikubo earn the honors of getting the action underway before flyweights Kim Kyu Sung and Wang Shuo continue the excitement. In the final prelim, Shinechagtga Zoltsetseg meets Yoshiki Nakahara in a fantastic featherweight matchup.

Six exciting athletes representing five countries will give you the mid-week action you deserve. Don’t sleep on these bouts!