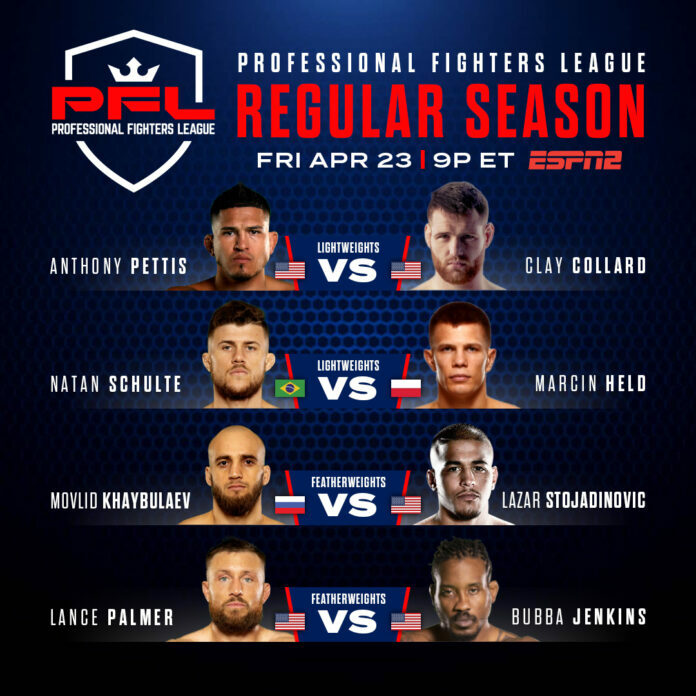 The PFL is returning this week with a season of compelling matchups for the first round of their featherweight and lightweight fights. On Tuesday, some of the fighters competing in those divisions talked about the fights they will be having at PFL 1.

Lance Palmer (22-3), the two-time featherweight tournament winner, will look to become a three-time winner but will have to go through a familiar face. Bubba Jenkins (14-4) who has fought in Bellator and is the former Brave CF featherweight champion wrestled Palmer numerous times from their Big Ten and NCAA days and beaten him. Jenkins is incredibly confident he’ll get the win, predicting a second-round knockout. “On paper and in reality it looks good for me,” he said. “I’m known as the champ killer.”

Palmer said that if Jenkins is “dwelling on 2008,” it’s not going to help him win. “This is a completely different sport.” When asked if he has a prediction of how he sees the fight going, Palmer said he will knockout Jenkins.

Brendan Loughnane (19-3) earned some notoriety when he was not signed by the UFC after his win on The Contender Series. UFC president Dana White was publically critical of Loughnane going for a takedown in the last 10 seconds of the fights and opted not to sign him based on that.

He sees his opponent, former UFC fighter, Sheymon Moraes (11-4) as an opportunity to show how truly great he is. “I’m glad they gave me him. He’s beaten top UFC fighters,” he said. “When I beat him it’ll solidify how good I am.” He added that while the “time off was difficult” he was able to train in Thailand and has “prepared so well for this fight.”

Moraes is coming to the PFL on a two-fight losing streak. He said he had contemplated retirement after he had been released from the UFC. “I didn’t have the motivation to fight,” he said. He stated that after taking a break he went to spar at the gym “to see if this is still inside me.” He said that fans will be to see “Sheymon 2.0” when he gets to compete again.

Natan Schulte (20-3-1) is a two-time lightweight tournament winner in the PFL. The Brazilian will have to get through Poland’s Marcin Held if he wants to be a three-time winner. Schulte was complimentary of his opponent. “He’s a fighter of tremendous experience on the ground.” But he added, “I’m going to attempt to submit him or knock him out in the first round.” As for the pressure coming in as a two-time winner, Schulte said he feels “like I’m defending my belt and legacy…I feel like I have extra weight and responsibility.”

Marcin Held (26-7) is considered a betting underdog in this fight which Held welcomes. “I like to be an underdog and this fight is good for me,” he said. With most of his wins coming by submission, he feels confident that he can grapple with Schulte and says he will try to submit the Brazilian.

Pettis made big news when he signed with the PFL and is considered to be a favorite to win the tournament. He said the potential to become a three promotional champion is “exciting.”

“I’m in this sport to be champion and that million-dollar bag is obviously very nice,” he said.

For his camp, Pettis said he hired a sports psychologist for this camp and is predicting a finish of his opponent.

Collard said Pettis was one of two opponents right off the bat.

“I was telling all the people in PFL I wanted him or Natan Schulte,” he said.

Coming into the fight as the underdog, Collard is not put off by the odds against him. “I love proving everyone wrong.”

Pettis is a high-level grappler and Collard said for the fight he was working wrestling and training with black belts in case it becomes a grappling fight.

Check out some of our other coverage of PFL 2021 with our interview with Curtis Millender.