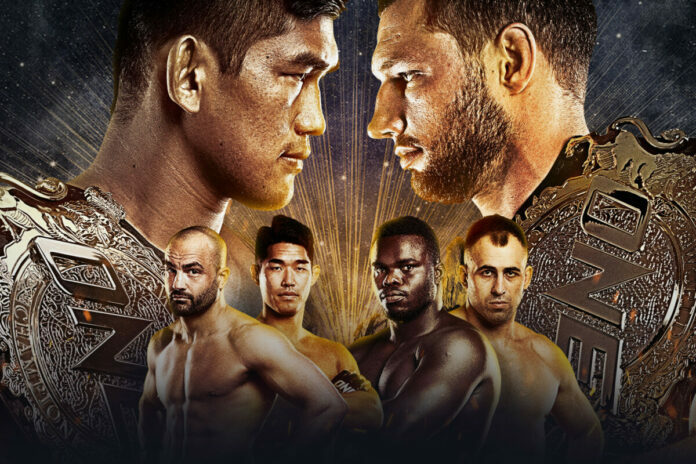 Tonight, Wednesday, April 28, ONE Championship brings another stacked event to the United States in primetime, as ONE on TNT IV goes down.

3 Things to Watch at ONE on TNT IV

ONE on TNT IV is a six-bout event filled to the brim with action. Fans should be tuned in and ready to rock with nonstop martial arts fireworks from start to finish. There is not a single piece of fluff on this bill, and finishes should come fast and furious.

But what are three specific things you should know going into the final primetime event in April? Let’s get to work and bring you the three things to watch from ONE on TNT IV.

Reinier “The Dutch Knight” De Ridder stunned a global audience at ONE: Inside The Matrix with a dominant first-round submission against Aung La “The Burmese Python” N Sang. Now, on short notice, he gets a chance at two-division glory while the Myanmar icon has an opportunity to get redemption.

As Aung La N Sang competes for much more than gold, with Myanmar at the forefront of his thoughts, he can be expected to be at his peak for this title defense.

There is a lot of intrigue in this matchup. Can Aung La N Sang stop the grappling of the Dutchman? Can De Ridder maintain his presence into the championship rounds that we know “The Burmese Python” can? Will the weight class make a difference?

Those questions, which will be answered when the bell rings, are why fans will be glued to their television sets. This budding rivalry is fascinating inside the Circle, and it comes to a head in the main event once more.

Eddie’s Bid For A Title Shot

Eddie “The Underground King” Alvarez thought he was going for a title shot at ONE on TNT I, but unfortunate circumstances did not make that the case. The bout, ending in a no contest, kept him in the same spot. Luckily, the matchup against Ok Rae Yoon presented itself.

Ok made an impressive debut against Marat Gafurov at ONE on TNT III. He showed his skills were ready for the global stage and the top-end of the division. He immediately thrust himself into the title picture.

These are the two top lightweights that Christian “The Warrior” Lee has yet to face, so it stands to reason that this could end up being a title eliminator. Alvarez’s bid to grab another major World Championship is still alive, but so are South Korean’s hopes of turning the lightweight division on its head.

The need to look impressive for both men should make this a wild encounter.

Eduard Folayang and Shinya Aoki have met twice before inside the Circle. Folayang became a star with his shocking ONE Lightweight World Title victory over Aoki in 2016. Over two years later, Aoki got his revenge and took the gold back.

Now they are both on the road back to the top. Aoki is currently the #4-ranked contender in the division and riding a bit of a resurgence. A victory over Folayang could bolster his argument for a rematch against Lee.

Folayang can punch his ticket back into the ONE athlete rankings. By doing so, he establishes himself as one of the few lightweights Lee hasn’t yet defeated. It makes him an attractive candidate for the champion.

It’s a trilogy match with a lot at stake and worth checking out on the preliminary card.

The main card will be available on digital platforms as well with cable subscription credentials. Tune in to Bleacher Report and the B/R app at 10 p.m. EST/7 p.m. PST.