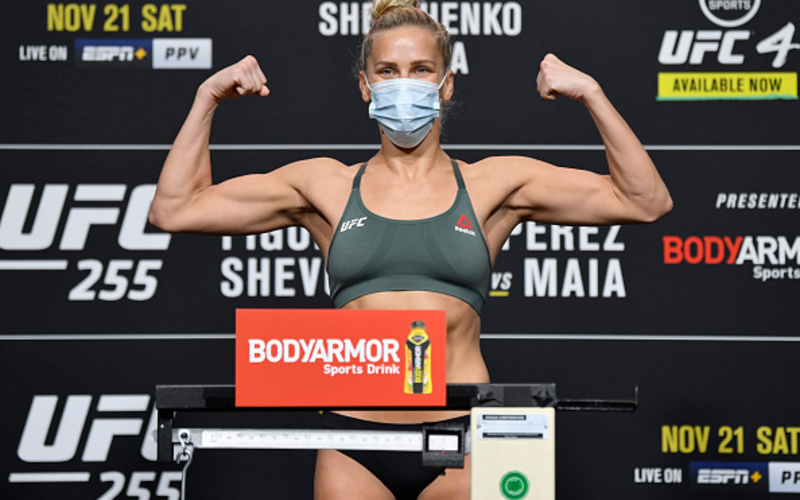 UFC 262 goes down this weekend and we’re being treated to three female crackers throughout the card. First, we see Gina Mazany take on Priscila Cachoeira. We then have a bout between Andrea Lee and Antonina Shevchenko, and on the main card we have Katlyn Chookagian and Viviane Araujo throw down.

The first of the flyweight fights at UFC 262 will be between Gina Mazany and Priscila Cachoeira. Mazany returned to the UFC having been cut and has gone 1-1. Most recently she defeated Rachel Ostovich in November. She was originally cut after going 1-3. Her return to the UFC was certainly questionable. Having been cut, she returned under the KOTC banner to defeat Valerie Barney via TKO in the first round. The thing is, Barny was 44 at the time and hadn’t competed since 2011 prior to their bout. Does a win over Barney really warrant a return? Well regardless, Mazany did return, losing her first fight back before defeating Ostovich last time out.

Priscila Cachoeira started her UFC career with three straight losses, including being brutalized in her debut by Valentina Shevchenko. Despite suffering three losses back-to-back, she bounced back with a knockout victory over Shana Dobson most recently. Despite entering the bout a slight underdog, she knocked out Dobson in just 40 seconds with an uppercut to record her first UFC victory.

This one isn’t one that is likely to win ‘fight of the night’ honors. Gina Mazany will likely look to dominate the wrestling game, especially with her work at Xtreme Couture. Having been a lightweight previously, she’ll likely hold a size advantage over the Brazillian, leading to her being easily being able to dominate in the clinch and on the ground. Mazany by decision.

Top 15 flyweights Andrea Lee and Antonina Shevchenko are set to clash at UFC 262. With Lee being badly out of form and Shevchenko looking to get her second consecutive win, this one will be sure to entertain. Both women are well-rounded, have good stand-up, and are good on the ground.

Andrea Lee started her UFC career with three straight victories and was arguably on the cusp of a title opportunity. Since then, however, she’s gone 0-3, losing two split decisions and a unanimous decision. The split decisions came against Joanna Calderwood and Lauren Murphy and the unanimous decision was against Roxanne Modafferi. Having had to pull out with a broken nose in December, Lee will be looking to get back into the win column at UFC 262.

Antonina Shevchenko was able to bounce back from a dominant loss at the hands of a wrestling heavy game from Katlyn Chookagian last time out against Ariane Lipski. Shevchenko was able to dominate on her way to a ground and pound victory at the end of round two. She carries the better momentum into this one but will be making her first appearance of 2021. We’ve seen her already this year, however, in the corner of her sister, the flyweight champion, Valentina Shevchenko at UFC 261. Will the winning run of the Shevchenko sisters continue at UFC 262? We think so, Shevchenko by unanimous decision in this one.

Katlyn Chookagian, who is ranked #2 will square off against #6 Vivian Araujo in a fight that will likely have title implications. Chookagian competed for the flyweight title at UFC 247 but was well beaten by the champion on this occasion. She bounced back, dominating the champ’s sister, Antonina Shevchenko. Unfortunately for the New Yorker, she suffered a TKO loss to the hard-hitting, Jessica Andrade in the Brazillian’s flyweight debut.

Chookagian was able to bounce back and notch a dominant decision victory over Cynthia Calvillo, ending a four-fight winning run for the former strawweight. When Chookagian is on, she’s on. She dominates opponents with her Karate style and her Renzo Gracie BJJ brown belt.

Vivian Araujo stands across from Chookagain at UFC 262 looking to make it three in a row. With a UFC record of 4-1, her only loss has come at the hands of Jessica Eye. With flyweight wins over Alexis Davis, Montana De la Rosa, and Roxanna Modaferri, Araujo is looking to get the biggest scalp on her record at UFC 262.