Last weekend’s triple-header leads into a single fight card weekend for our MMASucka staff picks. Nevertheless, action will be sensational with UFC 262 taking place tonight, May 15 from the Toyota Center in Houston, Texas. This will be the promotion’s first event in the city of Houston since February 2020 where Jones Jones defended his then-title over Dominick Reyes. The main card will begin at 10:00pm ET (7:00pm PT) live and available for ESPN+ subscribers on pay-per-view.

With former lightweight king Khabib Nurmagomedov’s retirement, the vacant 155-pound strap is on the line between top-ranked Charles Oliveira and Michael Chandler.

Oliveira will make the walk to the octagon for the 28th time in surprisingly his first ever fight for the championship. The Brazilian currently rides a dominant eight-fight win streak dating back to mid-2018, his 2020 very successful with victories over Kevin Lee and Tony Ferguson. A finish tonight would give Oliveira not only his first major title, but the record for most finishes ever in the UFC. His opponent, Chandler, makes only his second promotional fight on the biggest stage yet. The former NCAA D1 wrestler has kept it on the feet recently, having knocked out his last three opponents. Chandler now looks to start a new legacy after his lengthy dominance and reign in Bellator from 2010 to 2020.

More lightweights are set to meet in the co-main event between Tony Ferguson and Beneil Dariush. Former TUF winner and interim champion Ferguson looks for a much-needed win after decisive losses to both Justin Gaethje and the aforementioned Charles Oliveira. Kings MMA’s Dariush aims to add another win to his current six-fight streak, lastly taking a “Fight of the Night” decision over Carlos Diego Ferreira in February.

Check out our UFC 262: Chandler vs. Oliveira staff picks below. 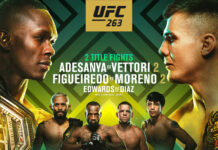