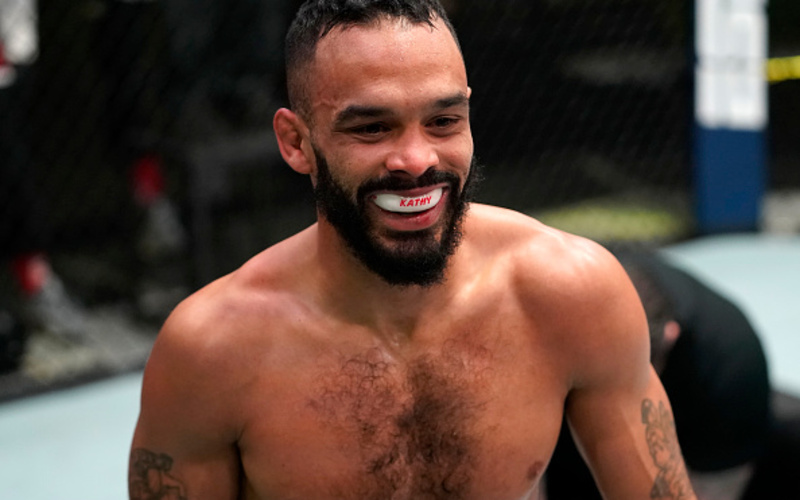 Rob Font will be taking on Cody Garbrandt in the main event this weekend at UFC Vegas 27. The winner of this fight will likely be in the mix for a title shot in early 2022. Both men have excellent boxing so this fight is looking like a fan favorite on paper.

Rob Font has finished 12 of his 18 wins with eight of those finishes coming by way of knockout. He has never been knocked out in his professional career and has only been submitted once, by Pedro Munhoz in 2017. Rob Font has a UFC record of 8-3 with five of those eight wins being knockouts. Font has won two performance of the night bonuses and one fight of the night bonus since joining the UFC. He is currently on a three-fight win streak that includes decisions over Ricky Simon and Sergio Pettis. Along with his most recent fight which was a TKO over Marlon Moraes.

Rob Font has a brown belt in Brazillian Jiujitsu and a white mongkol in Muay Thai. He trains with the New England Cartel out of Woburn, Massachusetts. Rob Font is a former CES featherweight champion and has even fought at lightweight at one point in his career. He will come into this fight with Garbrandt with a slight height and a six-inch reach advantage.

Cody Garbrandt has only had two fights in his professional career that did not end in a knockout. 10 of his 12 wins are by knockout and all three of his losses are by knockout. Garbrandt had quit the rise of success in the UFC going on a six-fight win streak winning the title against Dominick Cruz in his sixth UFC fight. He then lost his title to TJ Dillashaw in his next fight and even lost to Dillashaw after an immediate rematch. Following his back-to-back losses to Dillashaw, Grabrandt was finished by Pedro Munhoz. In his most recent fight, Garbrandt redefined himself by defeating Raphael Assuncao.

Garbrandt looked like a completely different fighter in the Assuncao fight. He looked more composed and patient. The knock-on Garbrandt has always been that he gets hit and loses control and swings for the fences. He did not do this in the Assuncao fight and instead stayed composed and earned a knockout victory in the final seconds of the second round. He is a former division two wrestler and has been working with Team Alpha Male since 2013. Garbrandt also added Mark Henry to his list of coaches back in 2019 right before the Assuncao fight, which clearly paid off.