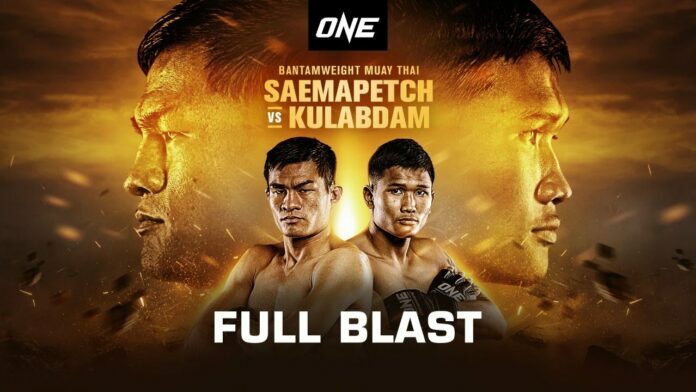 ONE: Empower has been postponed. Due to rising COVID concerns in Singapore, ONE Championship has delayed its all-women’s card featuring the opening round of the ONE Atomweight World Grand Prix.

But ONE will not let its fans go without martial arts action on Friday, May 28. In its place, ONE: Full Blast with five previously recorded bouts lining the card to satisfy everyone’s appetite.

A ONE Super Series Muay Thai contest between two bantamweight contenders will headline the event.

#1-ranked bantamweight contender Saemapetch Fairtex will exchange heavy artillery with Kulabdam Sor. Jor. Piek Uthai in the evening’s main event. The two Thai contenders are eyeing a title tilt in 2021 and will want to leave no doubt who deserves the chance with a dazzling performance.

Three mixed martial arts contests will help round out the bill.

India’s Kantharaj Agasa will make his ONE debut against the rising Chinese contender Xie Wei in the featured co-main event. Xie did outstanding on the ONE Hero Series before leaping to the main roster. The Chinese athlete has an 86% finishing rate that makes him a constant joy to watch as he always goes for the finish.

After a submission win, Ahmed Faress joins the main roster from the ONE Warrior Series to try his luck against Edward Kelly in a featherweight battle. The veteran will be a stiff test for the promotional newcomer as he tries to make a statement and keep his hot streak going.

Opening the card will be a catchweight affair between Anthony Do and Liang Hui. The two athletes will be attempting to get into the win column in ONE and build momentum. Both men love to push the pace and generate excitement which should lead to a fast-paced opening bout.

Also, in ONE Super Series action, Santino Verbeek and Miles Simson will compete in a welterweight kickboxing duel.

The previously recorded event has a strong slate of exciting martial artists, which should quench the thirst that has been building. With a strong main event featuring top ONE Super Series Muay Thai contenders and mixed martial arts bouts sure to thrill audiences worldwide, ONE: Full Blast will be a fun way to kickstart your morning.

Anthony Do vs. Liang Hui