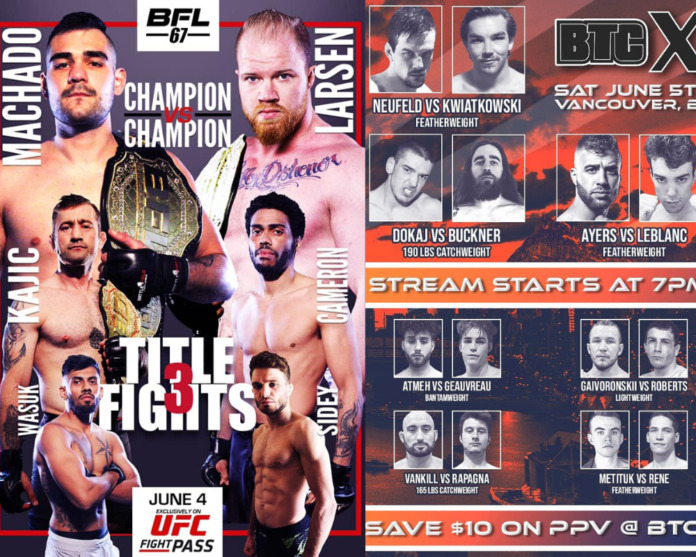 Forget about the UFC, this weekend Canadian MMA will be on notice with two different events going down from British Columbia.

Battlefield Fight League returns on Friday with BFL 67 and is arguably one of the most stacked cards from top to bottom in recent years. And on Saturday, BTC will invade B.C. for the very first time in promotional history with BTC X. To get in on the action in B.C. and if you’re wanting any non uk casino sites, then odds are up for the BFL and UFC cards.

There are not just one, or even two title fights at BFL, there are three.

The BFL heavyweight champion and number 5 ranked Canadian MMA heavyweight, Caio Machado will step inside the cage against the Unified MMA heavyweight champion and number 2 ranked Canadian MMA heavyweight Chris Larsen in the BFL 67 main event. Everyone and their dog knows Larsen has power, and that is likely what he will look to showcase on Friday night. For Machado, he has to utilize his cardio and hope to drag this fight into deep waters. These two are polar opposites when it comes to their attributes. Larsen is stocky and extremely heavy-handed. Whereas Machado is lean for a heavyweight and utilizes his precision strikes along with his tenacity to win his fights. To say we are in for a treat with this one is an understatement. And the big promotion brass will definitely have eyes on the main event.

In what could easily be the main event of any other Battlefield card, the welterweight championship is up for grabs, as super-welterweight champion Dejan Kajic looks to claim yet another belt against Kyran Cameron. Kajic is one of the most talented fighters in all of Canada. The 36-year-old possesses some of the most technically sound skills to ever enter the cage. He can read his opponents’ tendencies and use those against them in ways I’ve never seen before. And he is going in there against a ferocious fighter in undefeated Kyran Cameron. The Ontario native has gotten it done with finishes in four of his five fights. He has utilized submissions and strikes, so he is seemingly dangerous anywhere the fight goes.

The last of the three title fights will be for the vacant bantamweight championship, as Ali Wasuk takes on Serhiy Sidey. Wasuk lost a split decision in his first professional outing and has since gone on a four-fight tear. He hasn’t just won the fights, but he’s dominated all four of his opponents. Sidey is the opposite — he won his first four fights and lost his most recent by decision. The matchmaking for this fight is about as good as it gets. They are two of Canada’s best bantamweights and fans on UFC Fight Pass will have the opportunity to witness one man take that next step in their pro career.

There are no title fights on the BTC card, however, there is one of the most talked-about Canadian MMA fights this year.

The main event is a battle in the featherweight division between two men who have wanted to get their hands on each other for some time. Local favorite Josh Kwiatkowski will take on Alberta’s Lucas Neufeld.

When they say styles make fights, this one should be trademarked with that statement.

Kwiatkowski has a never-quit mentality. However, he hasn’t needed that in his last couple of fights. The ‘Juggernaut’ has showcased his striking prowess with back-to-back knockout victories. Neufeld is another guy who will be looking to finish the fight wherever it goes. ‘Wild Thing’ is 5-1 and has finished four of those five with submission victories. It would not shock me if this fight goes down as the fight of the weekend.

I said forget the UFC to open things up. Well, we can’t because Tanner Boser fights on Saturday and he will look to make Canada proud against Ilir Latifi at UFC Vegas 28.

You can watch all of the Canadian MMA which includes BFL 67 on UFC Fight Pass, BTC X on online PPV and UFC Vegas 28 on ESPN+.