On Monday, June 28, 2021, it was announced that Derrick Lewis would face Cyril Gane for the interim UFC heavyweight championship. This led to a heated argument between UFC President Dana White and heavyweight champion Francis Ngannou‘s manager, Marquel Martin.

Martin instantly said he was shocked by the news of the interim title fight. Which led to White responding.

“This dude is so full of sh*t!” White wrote on ESPN reporter Brett Okamoto’s Instagram. “He knows exactly what’s going on and isn’t ‘shocked’ at all. Because we told him several times this was coming. His management is incompetent and hopefully Francis starts taking a look at new people to help his career.”

Marquel Martin who used to work for the UFC, but now is a combat sports agent for CAA, responded to clear the air. Needless to say, he did not mince words. 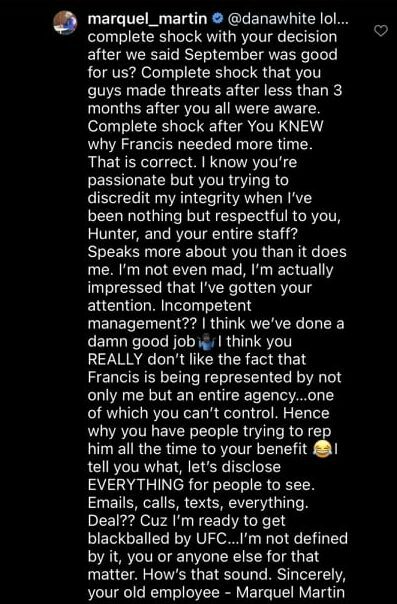 “Complete shock with your decision after we said September was good for us,” Martin said on his official Instagram account. “Complete shock that you guys made threats after less than three months after you all were aware. Complete shock after you knew why Francis needed more time. That is correct. I know you’re passionate but you are trying to discredit by integrity when I’ve been nothing but respectful to you, Hunter [Campbell] and your entire staff? Speaks more about you than it does me. I’m not even mad, I’m actually impressed that I’ve gotten your attention.

“Incompetent management? I think we’ve done a damn good job. I think you really don’t like the fact that Francis is being represented by not only me but an entire agency, one which you can’t control. Hence why you have people tryin to rep him all the time to your benefit. [Laughing crying emoji.] I tell you what, let’s disclose everything for people to see. Emails, calls, texts, everything. Deal? Cause I’m ready to get blackballed by the UFC. I’m not defined by it, you or anyone else for that matter. How’s that sound? Sincerely, your old employee, Marquel Martin.”

While unsure of what the next steps will be in this chaos, it seems as if Ngannou will be ready and waiting for the winner of Lewis vs. Gane later this year.

Ngannou won the UFC heavyweight championship at UFC 260 in March when he knocked out Stipe Miocic in the second round of their main event bout.